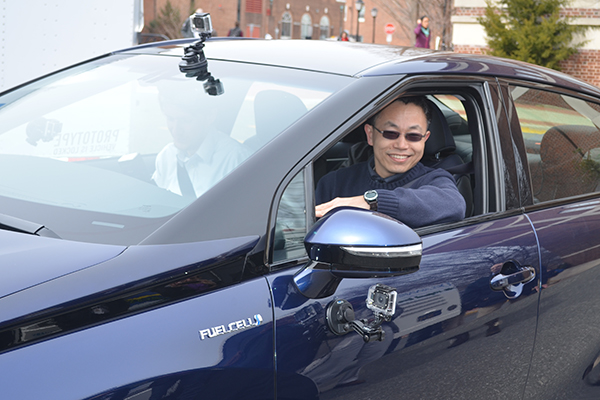 8:44 a.m., Jan. 14, 2016–Planes, Trains and Automobiles is a popular comedy from the 1980s, but there’s nothing funny about the amount of energy consumed by our nation’s transportation sector.

This sector — which includes passenger cars, trucks, buses, and rail, marine, and air transport — accounts for more than 20 percent of America’s energy use, mostly in the form of fossil fuels, so the search is on for environmentally friendly alternatives.

The two most promising current candidates for cars are fuel cells, which convert the chemical energy of hydrogen to electricity, and rechargeable batteries.

The University of Delaware’s Yushan Yan believes that fuel cells will eventually win out.

“Both fuel cells and batteries are clean technologies that have their own sets of challenges for commercialization,” says Yan, Distinguished Engineering Professor in the Department of Chemical and Biomolecular Engineering.

“The key difference, however, is that the problems facing battery cars, such as short driving range and long battery charging time, are left with the customers. By contrast, fuel cell cars demand almost no change in customer experience because they can be charged in less than 5 minutes and be driven for more than 300 miles in one charge. And these challenges, such as hydrogen production and transportation, lie with the engineers.”

Yan is prepared to address the biggest challenge fuel cells do face — cost.

He and colleagues recently reported a breakthrough that promises to bring down the cost of hydrogen fuel cells by replacing expensive platinum catalysts with cheaper ones made from metals like nickel. The work is documented in a paper published Jan. 14 in Nature Communications.

The researchers achieved the breakthrough by switching the operating environment from acidic to basic, and they found that nickel matched the activity of platinum.

“Our real hope is that we can put hydroxide exchange membrane fuel cells into cars and make them truly affordable — maybe $23,000 for a Toyota Mirai. Once the cars themselves are more affordable, that will drive development of the infrastructure to support the hydrogen economy.”

The experimental work was supported by the ARPA-E program of the U.S. Department of Energy under Award Number DE-AR0000009.

The computational work was financially supported by the Catalysis Center for Energy Innovation, an Energy Frontier Research Center funded by the U.S. Department of Energy, Office of Science, Office of Basic Energy Sciences under Award Number DE-SC0001004.

Stephen Giles was supported by a fellowship from the University of Delaware Energy Institute.

The research used resources of the National Energy Research Scientific Computing Center, a DOE Office of Science User Facility supported by the Office of Science of the U.S. Department of Energy under Contract No. DE-AC02-05CH11231.