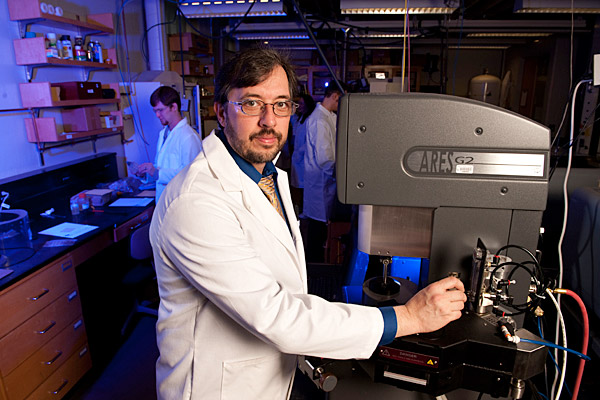 10 a.m., Dec. 15, 2015–The University of Delaware’s Norman J. Wagner and the late Richard F. Heck have been named fellows of the National Academy of Inventors (NAI).

Election to NAI fellow status is a high professional distinction accorded to academic inventors who “have demonstrated a prolific spirit of innovation in creating or facilitating outstanding inventions that have made a tangible impact on quality of life, economic development, and the welfare of society.”

Fellows will be inducted on April 15, 2016, as part of the fifth annual Conference of the National Academy of Inventors at the United States Patent and Trademark Office in Alexandria, Virginia.

Wagner, the Unidel Robert L. Pigford Chaired Professor of Chemical and Biomolecular Engineering, is noted for his development of shear thickening fluids for novel energy-absorbing materials used in such applications as puncture-resistant gloves and body armor.

Elected to the National Academy of Engineering in 2015, he leads an active research group focused on the rheology of complex fluids, neutron scattering, colloid and polymer science, applied statistical mechanics, nanotechnology and particle technology.

Heck, who was the Willis F. Harrington Professor Emeritus of Chemistry until his death in October 2015, was a 2010 recipient of the Nobel Prize in Chemistry “for palladium-catalyzed cross couplings in organic synthesis.”

Palladium-catalyzed cross coupling is used in research worldwide, as well as in the commercial production of pharmaceuticals and molecules used in the electronics industry.

The so-called Heck Reaction is now generally regarded as one of the most useful organic reactions ever discovered, with some 120,000 references in the scientific literature since 1980.

The 168 new NAI Fellows bring the total number to 582, representing more than 190 prestigious research universities and governmental and non-profit research institutions. The 2015 Fellows account for more than 5,300 issued U.S. patents, bringing the collective patents held by all NAI Fellows to more than 20,000. These academic luminaries have made a significant impact to the economy through innovative discoveries, creating startup companies, and enhancing the culture of academic invention.

The academic inventors and innovators elected to the rank of NAI fellow are named inventors on U.S. patents and recognized for outstanding contributions to innovation in areas such as patents and licensing, innovative discovery and technology, significant impact on society, and support and enhancement of innovation. Wagner and Heck were nominated by Brad Yops, assistant director of the Office of Economic Innovation and Partnerships, who heads technology transfer at UD.

Wagner’s research areas include the effects of applied flow on the microstructure and material properties of colloidal suspensions, polymers, self-assembled surfactant solutions, and complex fluids in general.

He received the Siple Award in 2002 from the U.S. Army for his development of shear thickening fluids for novel energy-absorbing materials and is co-founder of STF Technologies LLC, a company commercializing STF-Armor for puncture-resistant surgical gloves.

Wagner has authored or coauthored over 200 scientific publications and patents, and he serves on the executive committees of the Society of Rheology and the Neutron Scattering Society of America, as well as on the editorial boards of six international journals.

Patented and commercially developed scientific instruments include rheo-optic instruments (TA Instruments) as well as novel rheo-SANS instruments for investigating nanoscale and microscale structure in flowing systems currently available at the National Institute of Standards and Technology Center for Neutron Research and the Institute Laue Langevin D22 in Grenoble, France.

Wagner earned his bachelor’s degree from Carnegie Mellon University and his doctorate at Princeton University.

While at UD, Dr. Heck discovered the “Heck Reaction,” which uses the metal palladium as a catalyst to get carbon atoms to connect up — a difficult feat in nature.

The discovery has enabled the production of new classes of pharmaceuticals for treating cancer, HIV, asthma, migraine headaches, stomach ailments and other maladies. The work revolutionized DNA sequencing, making possible the coupling of organic dyes to the DNA bases, which was essential for the Human Genome Project.

Heck’s achievements reverberate throughout our lives every day, in products ranging from sunscreens to super-thin computer monitors.

In 2004, UD’s Department of Chemistry and Biochemistry established the Heck Lectureship, an annual award given in recognition of significant achievement in the field of organometallic chemistry.

Heck completed his bachelor of science degree in 1952 and his doctorate in 1954 at the University of California Los Angeles (UCLA).

After a 14-year career with Hercules Chemical Company in Wilmington, Delaware, Heck joined the University of Delaware faculty in 1971. He retired in 1989.

The National Academy of Inventors is a 501c3 non-profit organization composed of more than 200 U.S. and international universities and non-profit research institutes, with more than 3,000 individual academic inventor members and growing rapidly. It was founded in 2010 to recognize and encourage inventors with a patent issued from the U.S. Patent and Trademark Office, enhance the visibility of academic technology and innovation, encourage the disclosure of intellectual property, educate and mentor innovative students, and translate the inventions of its members to benefit society.