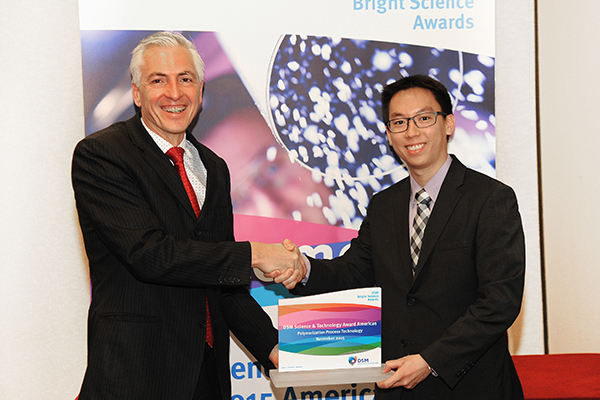 2:29 p.m., Dec. 8, 2015–Wrinkled hands are the price we pay for spending too much time soaking in the tub or washing dishes. While the wrinkles may not be attractive, they do help us hold onto objects underwater.

And, as it turns out, nature really does know best: the pattern of wrinkling on our wet hands seems to be optimized to provide the perfect drainage network for improving our grip.

Wrinkled polymers also offer unique properties, but it’s up to engineers to figure out how to control the pattern of wrinkles for optimized performance in applications ranging from coatings to security tagging.

Now Stephen Ma, a doctoral student at the University of Delaware, has found an innovative way to create wrinkled patterns on a polymeric surface using light.

The award was presented in partnership with the American Institute of Chemical Engineers (AIChE) Process Development Division during AIChE’s annual meeting in November.

Ma was among four finalists chosen to share their work at the competition, which focused on the development of polymerization processes and process technologies for novel polymeric performance materials. Based on delivery of a short oral presentation on his work, “Photodirected Control of Topography using Thiol-ene ‘Click!’ Chemistry,” Ma emerged as the winner of the $5,000 prize.

He explains that controlled wrinkling increases the surface roughness of a material, paving the way to new functionality in such areas as antifouling coatings, optical coatings, and tunable lenses.

“For more than two decades, researchers have been working to place wrinkles on the surface of a silicon-based organic polymer known as PDMS,” says Kloxin. “But a fundamental challenge remained — figuring out how to confine and align the wrinkles, which are in disarray on the elastomer after the initial stage of processing. Stephen’s innovative two-tiered polymerization process employs a second light-initiated polymerization step to control the texture and lock in various shapes.”

The patterns can mimic structured surfaces from nature — like the “pruney” skin that helps us pick up objects with our wet hands or the wrinkles that keep an elephant’s baggy skin cool — or the growth of cells can be directed into predefined structures.

“Adding nature-inspired functionality to the surface of polymers with the technique presented by Stephen Ma could be the next leap forward in the use of polymers in a variety of applications,” said DSM scientist Eric Grolman.

“I particularly like the easy and sustainable way of manufacturing he has introduced by exposing substrates to light. This could bring industrial production a lot closer.”