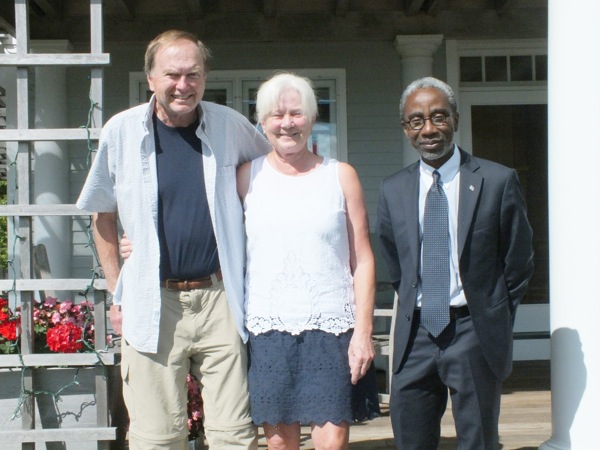 1:55 p.m., Oct. 27, 2015–Allan Ferguson was in the very first engineering class taught by the late Jon Olson at the University of Delaware.

“He was absolutely brilliant, and here we were, these young, malleable minds, ready to learn the really complex things he would teach us,” the 1965 chemical engineering graduate recalls. “And then he gave the first exam.”

Ferguson flunked, but he wasn’t the only one.

And yet failing that exam might have been one of the best things to happen. As legend has it, Olson went home and told his wife, “They didn’t get it,” to which she responded, “Maybe you ought talk in an everyday kind of way.”

So he did. It’s a story Dr. Olson would relate to Ferguson in later years, and a lesson that continues with Ferguson today to “keep it simple.”

During his 20-year career as a chemical engineer for several Johnson & Johnson divisions, followed by senior operating positions at two biotech companies, then 20-plus years in international venture capital investing in early-stage biotech and medical device companies, Ferguson would often think back on that anecdote.

“I’ve been good at figuring out ways to simplify — to make things cheaper, better, faster; to analyze problems; to not accept the norm,” he says. “From professors like Jon Olson and Bob Pigford and Jack Gerster, I learned how to break down the complexities into simple parts and prioritize those parts into a solution — all the while thinking outside-the-box.”

Like the time he looked at separators in the food industry to find more efficient processes for a biotech company that was using a device similar to an ordinary kitchen blender. They needed one that would mix things up, but not too fast, in order to preserve the integrity of the fragile, human cells.

Or when he managed process engineering for the Domestic Operating Company within Johnson & Johnson during the energy crisis of the 1970s and reduced energy costs by 80 percent by simply turning off a valve.

“My professors taught me how to analyze and assess problems, to look at them more broadly,” Ferguson says.

In honor of such mentorship, the Fergusons recently committed $3.5 million to establish the Allan and Myra Ferguson Distinguished Chair of Chemical and Biomolecular Engineering.

The Double Dels seek to continue “that tradition of excellence, of quality teaching.”

“I love the smile on his face when he talks about what he learned from his professors and classmates,” says Myra Ferguson, who is a 1966 graduate of UD’s College of Arts and Sciences. “We want to support professors who are gifted with the art of teaching, who want to share their knowledge, who have that desire to nurture young minds à la Gerster/Olson/Pigford.”

“Great faculty are the heart of a University, which is why we’re so grateful for this gift,” says Acting President Nancy Targett. “Allan and Myra aren’t just helping us recruit and retain rising stars in the field. They’re supporting the mentorship and scholarship that will take UD to new heights.”

“Our internationally recognized chemical engineering program was developed on the foundation of giants in the field like Allan Colburn and Robert Pigford,” adds Babatunde Ogunnaike, dean of the College of Engineering. “Generous donors like the Fergusons will significantly enhance our ability to maintain this level of excellence into the future.”

The future of the Department of Chemical and Biomolecular Engineering is the ultimate goal for Ferguson.

“The strength of our faculty is absolutely necessary for the quality of the program to continue,” he says. “Chemical engineering is a star at UD, and we want to keep it that way.”

The Fergusons are happily retired in New Hampshire, where they manage a timber farm.

An endowed chair is the highest academic award a university can bestow on a faculty member, and the Allan and Myra Ferguson Distinguished Chair of Chemical and Biomolecular Engineering will serve as a powerful recruitment and retention tool. The Department of Chemical and Biomolecular Engineering, which celebrated its centennial in 2014, is consistently listed in the top 10 in U.S. News and World Report rankings. The department prides itself on both its outstanding research programs and its strong commitment to undergraduate education. The Ferguson Distinguished Chair will provide research support for a faculty member in the department and will be awarded by the department chair.