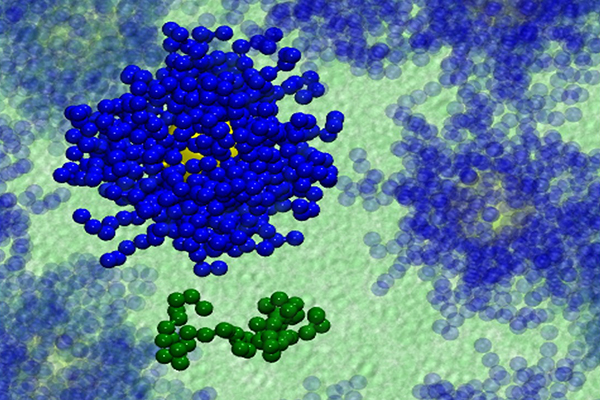 1:34 p.m., Sept. 16, 2015–Polymer nanocomposites are used in a wide range of applications, from automobile parts and tires to high-tech electronics and solar cells.

As with traditional composites, the properties of nanocomposites can be tailored to the requirements of specific applications, but achieving those properties can be challenging.

“By controlling and tuning how well the nanoparticles disperse or aggregate in the polymer matrix, we can tailor the macroscopic properties of the resulting nanocomposite.”

Jayaraman is part of a research team that recently elucidated new science about the behavior of polymer-nanoparticle composites — a discovery that translates into unprecedented abilities to control and tune dispersion and aggregation.

Their findings appear in a paper, “Wetting–Dewetting and Dispersion–Aggregation Transitions Are Distinct for Polymer Grafted Nanoparticles in Chemically Dissimilar Polymer Matrix,” in the Aug. 3  issue of JACS (Journal of the American Chemical Society).

Jayaraman explains that if nanoparticles are simply added to a polymer, they tend to aggregate rather than to disperse. One way to promote dispersion is to coat or graft the nanoparticles with the same polymer as the matrix.

“People have been using chemically identical graft-matrix polymer nanocomposites for awhile,” she says, “and the physics that governs nanoparticle dispersion/aggregation in such nanocomposites is now well established, both experimentally and theoretically. However, there are synthetic difficulties in achieving the conditions that lead to particle dispersion.”

So instead of using nanoparticles and a polymer matrix with similar chemistries, Jayaraman, her graduate student Tyler Martin, and her experimental collaborator Ramanan Krishnamoorti at the University of Houston decided to see what would happen if they chose graft polymer and matrix polymer chemistries that would attract each other.

“Our hope was that this attraction would increase interpenetration of the matrix polymer with the graft polymer on the nanoparticle, stopping the nanoparticles from aggregating in the polymer matrix and enabling us to achieve better dispersion,” she says.

The interpenetration of the graft and matrix polymer, called “wetting” in the nanocomposite field, promotes dispersion, while its opposite, dewetting, leads to aggregation.

Both are desirable depending on the required properties, but the team’s innovation of using mixed chemistries challenged the established science, which said that both wetting-dewetting and dispersion-aggregation were synonymous and were “either-or” phenomena.

“What we found is that while dispersion-to-aggregation represents a sharp change between two states, the transition from wetting to dewetting with mixed chemistries is actually a gradual change,” Jayaraman says. “Our finding opens up the potential to tailor materials through various stages of wetting or graft-matrix polymer interpenetration.”

“We’ve basically discovered that the tuning knob is a lot finer than we initially thought,” she adds.