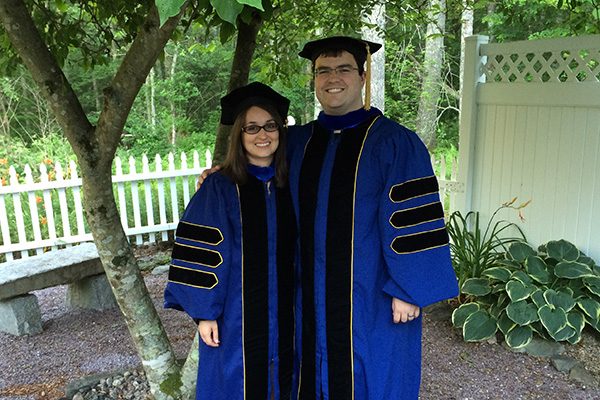 1:04 p.m., July 8, 2015–Jacob Bernoulli, Leonhard Euler and Simeon Poisson are all icons in the world of mathematics, but to Babatunde Ogunnaike, they’re more than just pioneers who developed foundational principles of engineering — they’re part of his academic heritage.

That heritage is so important to Ogunnaike, dean of the University of Delaware College of Engineering, that he passes it along to each of his graduate students in the form of an academic tree upon graduation.

He hopes the gift will inspire them.

“That’s the African in me,” says the Nigerian native, who is also the William L. Friend Chair of Chemical Engineering.

“In the oral history tradition of African culture, they tell you who your fathers were and what they did. If you know your heritage, you carry yourself a certain way. You want to honor that lineage.”

Adding leaves to the tree

Each tree starts with the graduate at the top and follows the influential academics whose work led to his or her current achievement.

From Gottfried Wilhelm Leibniz, one of the inventors of calculus, to Neal Amundson, known as the father of modern chemical engineering, Ogunnaike traces the intellectual heritage of centuries of scholars to convey what students have been given and what they have a responsibility to share.

“I want my students to see that they come from an illustrious background,” he says, “and I want them to realize that the people who have come before them are more than just names in a textbook.”

Melissa St. Amand and Jacob McGill, who married in 2012, received their academic trees when they earned their doctoral degrees in chemical engineering in 2013 under Ogunnaike’s advisement. The gifts hang on the wall in their home office next to their diplomas.

“In academic circles, knowing your lineage is very important,” St. Amand says. “You always talk about your academic grandfathers, especially in research. If someone knows you came from a certain lab, it gives you a talking point.”

For McGill, it was “really neat to finally join the rest of the group and to see that you’re continuing on the same path.”

Just as Ogunnaike credits the research giants who paved the path to his career, he recognizes those who guided him as an educator. In particular, he recalls Byron Bird, professor at the University of Wisconsin, where he earned his doctorate.

Bird did the preliminary research about the academic heritage of Wisconsin’s chemical engineering faculty for the department’s centennial in 2005. Bird’s academic genealogical research provided the foundation for Ogunnaike’s tree through his adviser, Harmon Ray.

“Prof. Bird is a true Renaissance man and a phenomenal teacher,” Ogunnaike says. “In my last year there, he offered a class that he taught only once every seven years. I was about to graduate, but I took the class anyway because I wanted to learn how to teach.”

Ogunnaike comes from a long line of teachers, so to him, education is the family business.

“My mother was an English teacher, and my students and coworkers feel the effects of her influence,” he says. “She wouldn’t tolerate split infinitives or dangling participles.”

For Ogunnaike, there are no disciplinary boundaries with regard to communication.

On May 29, Ogunnaike placed the University’s blue and gold doctoral hood over Zachary Whiteman’s head, a symbol that another member of his research group had reached the pinnacle of scholarship.

On June 22, at a special dinner, Whiteman received his academic tree.

“As a teacher and a mentor, Prof. Ogunnaike has been nothing short of outstanding and inspiring,” Whiteman says.

“His knowledge and expertise in the fields of process systems engineering and statistics is unparalleled, and he continually challenges his students to perform their best. As a result of his mentoring over the past five years, I believe I am fully prepared for any challenge I will face along any path my career may take.”

As a research mentor and teacher, Ogunnaike has lit Whiteman’s candle.

Now, he says, his former student has a responsibility to go out and light others’ candles.

And Whiteman is ready to do that.