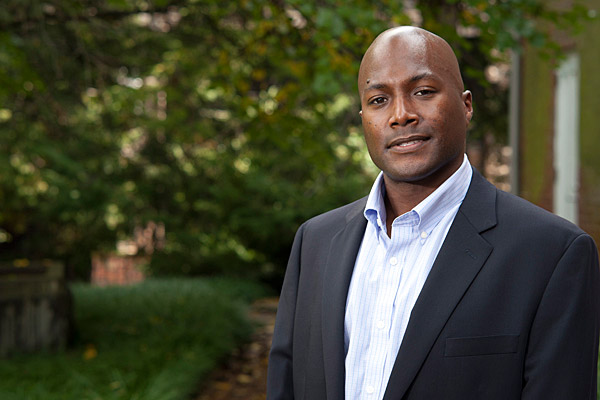 12:58 p.m., June 8, 2015–Thomas H. Epps, III has been selected as the 2015 winner of the Owens-Corning Early Career Award by the Materials Engineering and Sciences Division (MESD) of the American Institute of Chemical Engineers (AIChE). Epps is the Thomas and Kipp Gutshall Associate Professor of Chemical and Biomolecular Engineering and associate professor of materials science and engineering at the University of Delaware.

The award recognizes outstanding independent contributions to the scientific, technological, educational, or service areas of materials science and engineering by people who are under the age of 40.

Epps was cited for “groundbreaking research in understanding and engineering block polymer interfacial energetics toward the nanoscale self-assembly of polymers in bulk, thin films, and solutions.”

“His extensive and growing scholarship has focused on developing polymer systems to address several of the most pressing problems in energy, health, and the environment and has resulted in a significant body of scientific publications.”

Epps’ research team has advanced efforts in a number of critical areas, including targeted drug delivery systems and safer electrolytes for lithium batteries.

Epps will receive the award and deliver an award address at the AIChE Annual Meeting in Salt Lake City in November.

Epps earned bachelor’s and master’s degrees at the Massachusetts Institute of Technology (MIT) and a doctoral degree at the University of Minnesota. He joined the UD faculty in 2006 after completing postdoctoral work as a National Research Council Postdoctoral Fellow in the Polymers Division at the National Institute of Standards and Technology (NIST) in Gaithersburg, Maryland.

He has received a number of national and international awards, including recently being named a Kavli Fellow of the National Academy of Sciences.

At UD, his achievements have been recognized through his appointment as Outstanding Junior Faculty Member of the College of Engineering in 2009, Mangone Young Professor in 2011, and Thomas and Kipp Gutshall Associate Professor in 2012.

Epps also has been an invited speaker at many national and international meetings, including several Gordon Research Conferences.