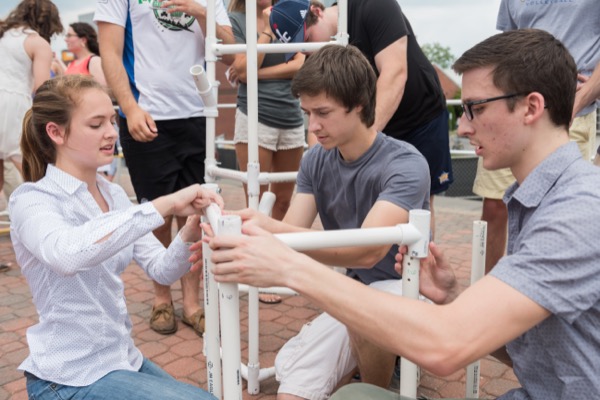 11:16 a.m., June 17, 2015–Creative people across the globe are using off-the-shelf products and materials to design and build novel devices ranging from robots that carry out simple household chores to inexpensive cartridges that deliver life-saving medications.

The so-called Maker Movement has gained momentum over the past several years due largely to new technologies like 3-D printers and readily available information about how to use them, as well as to a variety of support services offered through platforms such as Kickstarter, Indiegogo and Local Motors.

The movement received an extra boost in 2014 when President Barack Obama hosted the first-ever White House Maker Faire in June. Even the Christmas decorations at the home of the First Family later that year reflected the work of makers, including a robotic replica of First Dog Bo, crowd-sourced lighting design and 3-D printed tree ornaments.

Obama’s call to action to create a “Nation of Makers” was heard and embraced in the University of Delaware’s College of Engineering, where faculty and students “know a little something about making,” as Dean Babatunde Ogunnaike pointed out in a letter to Obama supporting the movement earlier this month.

UD is now part of a coalition of universities nationwide committed to growing the Maker Movement.

“For the past 150 years,” Ogunnaike wrote, “we have been training the business and engineering workforce that powers manufacturing and innovation up and down the I-95 corridor. Our graduates are leaders in business and product development at companies like Siemens, DuPont, W.L. Gore and Astra Zeneca, where they are known for being hands-on, creative, and persistent. It all starts with their training here at University of Delaware, where our unofficial motto is ‘We Build Engineers.’”

Ogunnaike cited the college’s interdisciplinary design program, which brings together students from engineering, business and the arts to solve real-world problems from industrial and institutional partners.

Recent project examples include a simulator for use in evaluating the driving ability of patients following knee surgery, a line of wearable simulation systems to improve the training of young clinicians without compromising quality of care, and a hands-on curriculum that features real-world challenges from orthopedic surgery and biomedical engineering.

All of these products are either currently for sale or in the transition stage to mass manufacturing through industrial partners.

Obama followed up his 2014 White House Maker Faire with a Week of Making from June 12-18, 2015. In addition to helping makers launch new businesses and challenging them to tackle the nation’s most pressing problems, Obama has called for dramatically expanding the number of students that have the opportunity to become makers.

In another White House initiative launched earlier this year, UD became one of some 120 U.S. engineering schools leading a transformative movement in engineering education aimed at preparing undergraduates to solve “Grand Challenges” — complex yet achievable goals to improve national and international health, security, sustainability and quality of life in the 21st century.

Ogunnaike sees the Grand Challenges and the Maker Movement as complementary initiatives.

“Both are aimed at preparing students to think creatively in solving seemingly intractable problems and addressing difficult issues,” he says. “And in both cases, it’s our job to provide them with the tools they need to succeed, including innovative curricula, design spaces that foster creativity, and meaningful opportunities to engage with people from other fields who bring diverse perspectives to the table.”

At UD, others involved in the maker push include Dustyn Roberts and Jenni Buckley in mechanical engineering, Cole Galloway in physical therapy and Ashley Pigford in art.

Roberts and a group of students will represent UD at a Maker Faire in New York in September.

Buckley, co-developer of the Orthopaedics in Action curriculum, teaches in the interdisciplinary design program and coordinates an annual Design Expo in the Design Studio, a maker space in Spencer Laboratory.

Galloway, founder of the GoBabyGo program, in which off-the shelf ride-on cars are adapted for children with limited mobility, has participated in two TEDMED-sponsored webinars focused on making in health care.

Pigford teaches in engineering’s interdisciplinary design program and recently participated in the Designs for Healthy Living exhibition hosted by the College of Health Sciences. That event was organized by fashion instructor Martha Hall, who works on functional fashions for children with special needs in the GoBabyGo program.