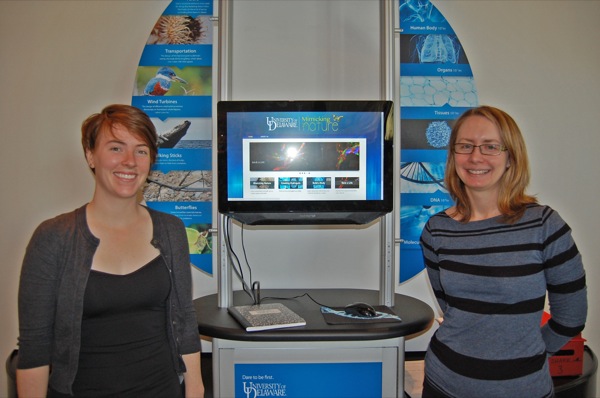 11:04 a.m., May 28, 2015–April Kloxin thinks science rocks, and she wants everyone from grade-schoolers to grandparents to think that too.

So her research group at the University of Delaware is reaching out to the public through an interactive kiosk at the Delaware Museum of Natural History, as well as through a radio show on the University’s student-run radio station, WVUD.

The Mimicking Nature kiosk greets the 75,000 people who visit the museum every year, while the radio show — appropriately called Science Rocks! — has the potential to reach thousands more.

Kloxin’s research focuses on the design of materials that mimic and respond to specific biological systems and their use for understanding and directing these systems to heal the body.

The kiosk is aimed at demystifying these materials through simple explanations, engaging graphics, analogies and photographs. Hands-on materials at the kiosk are complemented by web-based resources that can be accessed on-site or remotely.

“One focus of my group’s research is mimicking lung tissue, but the materials we work with, called hydrogels, have a broad range of biomedical applications including drug delivery systems and tissue engineering platforms to study a variety of diseases,” says Kloxin, who has joint appointments in the departments of Chemical and Biomolecular Engineering and Materials Science and Engineering.

“The goal of our work is to develop technologies that improve human health, and we want to show science in a positive light.”

The radio show was launched in the fall of 2013, when several of Kloxin’s students applied to be DJs on WVUD.

They chose science as their theme because… well, because they think it rocks.

According to Rehmann, the show is divided into segments including a guest researcher interview, science news and discussions about current science issues, interspersed with music ranging from classic rock to folk.

“We try to convey the importance of science communication and how people get into scientific fields,” Sawicki says. “That’s key to bringing science to the general public and making it more accessible.”

Smithmyer points out that many people never interact with scientists.

“It’s easy to be distrustful of things you don’t understand,” she says.

Kloxin sees the kiosk and the radio show as a way to build bridges, both between scientists and the public and between research and education.

“Both of these are great platforms that enable us to reach a broad audience,” she says.

Funding for Science Rocks! is provided by Kloxin’s NSF award and UD’s IGERT program in Systems Biology of Cells in Engineered Environments.