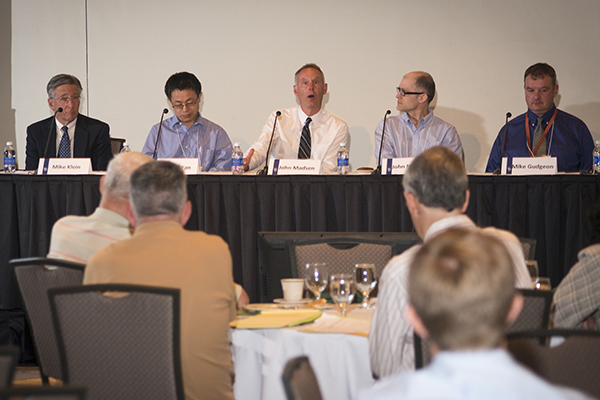 10:53 a.m., May 18, 2015–Termites strike terror into the hearts of homeowners, but they could provide a nonpolluting way to convert coal to methane if microbes from their gut can be sent below ground as tiny miners.

This novel concept was presented at the University of Delaware Energy Institute annual symposium at the Clayton Hall Conference Center on May 13. The event attracted more than 50 people from the energy community to address the clean energy challenge.

Addressing the grand challenge of sustainable, clean energy will require the input of not only top scientists and engineers but also behavioral, economic and policy experts, said Charlie Riordan, deputy provost for research and scholarship, in welcoming the group.

“One of the reasons energy and the environment are considered grand challenges is that by definition they’re almost intractable problems,” he said. “Rather than being deterred, however, we should be inspired to appreciate that making progress in these challenges will require addressing them in a very interdisciplinary way.”

The “microbial miners” project, led by Prasad Dhurjati, professor of chemical and biomolecular engineering, is one of six proposals selected for funding under UDEI’s Innovative Energy Research Grants Program (IERGP), which was launched in 2014 to facilitate the preparation of large-scale, competitive research proposals. The inaugural IERGP projects were highlighted during the morning session of the symposium.

“Mining coal and burning it is what gives coal its bad reputation,” said Dhurjati in presenting the termite concept. “If we can convert coal to methane below ground, it can become a clean fuel source.”

The other four IERGP projects are:

Neeloo Bhatti-McAndrew, associate director of UDEI, encouraged researchers to apply for the second round of funding under IERGP. Proposals are due June 15 and project start date is Sept. 1.

Mike Gudgeon, technical manager for PBF Energy, which bought the Delaware City refinery in 2010, discussed the challenges of reopening the shuttered facility. An entrepreneurial startup, PBF brought to the site an improved business plan and a commitment to environmental improvements.

Gudgeon reviewed the many regulations implemented in the U.S. beginning in the 1970s to control air and water quality. These included the elimination of lead from gasoline, required improvements in the fuel efficiency of cars and limits on emissions from refineries.

The result was that fossil fuels became cleaner, but the regulatory burden and its accompanying costs also put many refineries out of business. Valero had previously operated the Delaware City refinery and the facility’s closure in 2009 was huge in Delaware, with almost 1,000 well-paying jobs lost and 10 times that many indirectly affected.

The forces that move the energy industry today, Gudgeon said, are marketplace, regulation and technology, with a focus on the global implications of all three.

He predicted that the future will involve a mix of energy sources, including fossil fuels, hydrogen, nuclear and renewables.

“Long-term strategy will have to encompass some combination of all sources,” he said. “None of them is perfect.”

The panel discussion, which was monitored by Mike Klein, Dan Rich Chair of Energy and UDEI director, focused on challenges in meeting a sustainable energy future in the face of declining petroleum prices.

Panelists Yan, Newberg, Madsen and Gudgeon agreed that while current price reductions could decrease motivation for research on alternative technologies, any long-term strategy needs to look beyond short-term trends.

“Volatility is the key word,” Gudgeon said. “The price of crude is cyclic, and you can’t get caught up in downswings and upswings — there are too many influences to make decisions based on today’s prices. So many things are at play that no one can predict the price of crude within the next six months, let alone over the next 40 or 50 years.”

UDEI was established in 2007 to provide a focal point for energy-related activities at UD and to create the enabling science and advance the development and deployment of new and emerging energy technologies.

The institute’s mission is to marshal and expand the University’s science, engineering and public policy expertise in new and emerging energy technologies and, with its industry and government partners, to use this research to address the entire spectrum of challenges posed by future energy needs.

The institute’s annual symposium showcases IERGP projects, provides a forum for researchers and students to interact, heightens awareness of potential collaborations, and highlights the energy and environmental challenges in meeting a sustainable energy future.