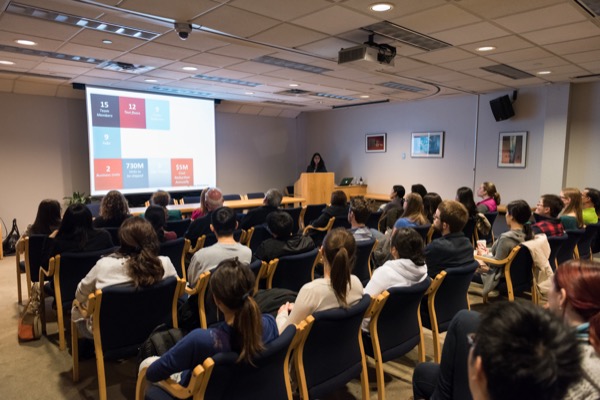 11:10 a.m., April 28, 2015–When Richard Haines graduated from the University of Delaware in 1957 with a degree in chemical engineering, the number of women graduates in engineering could literally be counted on one hand.

Today, one out of every four engineering undergraduates at UD is a woman, but Haines knew that a large, permanent base of dollars could help nudge the percentage upward. So in 2013, he and his wife, Janet, gave a $300,000 gift to the College of Engineering to help advance women in engineering.

“My wife was a technical writer at Bell Labs, and virtually all of the scientists whose work she documented were men,” Haines says. “Membership in a number of women’s groups associated with her work showed that the environment in which she worked was not being populated by women coming up through the ranks.”

“At the time, in the early to mid-1970s, little was being done to encourage women in the engineering sciences, so the chance to help make a difference at the University of Delaware now is very satisfying to both of us,” he adds.

On Friday, April 10, Richard and Janet Haines were enjoying their retirement home in New Hampshire, but their presence was felt on the UD campus as five accomplished women shared their insights during an engineering career panel. Some 75 students, faculty and staff turned out for the event, which was held at the Center for Composite Materials.

The panel was sponsored by Women in Engineering (WIE), an organization that promotes, mentors and enables the participation of women students and faculty in engineering studies and the workplace.

“The career panel is always one of WIE’s best attended events,” says Heather Doty, assistant professor of mechanical engineering and a faculty adviser to the WIE graduate student steering committee.

“Students enjoy and benefit from interacting with a variety of role models from both industry and academia. This year, thanks to the Haines gift, we were able to reach out to the broadest diversity of speakers, both geographically and professionally, that we’ve ever had.

“For example, we had participation from an electrical engineer from Texas Instruments, a company that has never before been represented at our career panel. The Haines gift has allowed us to access greater networking opportunities for our students and to develop ties with more industries across the country.”

Schultz, who completed her doctorate at Delaware in 2011 and is now an assistant professor at Lehigh, understands the value of both mentoring and networking. As a student of Eric Furst, professor of chemical and biomolecular engineering, she worked collaboratively with Kristi Kiick, professor of materials science and engineering, on hydrogels characterization — an experience that laid the groundwork for her current research on characterization of new materials for tissue engineering.

Barbacane echoed the importance of mentoring and networking and added a third piece of advice in her presentation: “Create your own personal brand,” she said, “and take the initiative to see how you can stand out.”

Although she started her career as a systems engineer, Barbacane, who earned her bachelor’s degree in electrical engineering at UD in 2001, quickly moved to more business-oriented functions after completing a leadership development program within her company.

That’s advice that Haines himself might have given if he had been on the panel. Armed with bachelor’s and master’s degrees in engineering, he “drifted into computer systems” with DuPont, where he fell in love with the challenges and opportunities in the then-nascent field. He became interested in all aspects of computing and realized he was still an engineer, just no longer of the “chemical” sort.

Air Liquide’s Jacksier pointed out that no matter what career path an engineer follows, “everybody’s in sales.”

“If you can’t sell your work, no one’s going to pay you for it,” she said.

St. Armand, who earned a doctoral degree in chemical and biomolecular engineering at UD in 2013, sought a postdoctoral fellowship at NIH, seeing it as a great opportunity to gain experience while also keeping her options open between academic and industrial career paths.

Her advice to the audience crossed all paths: “During an interview, remember that you’re interviewing them as much they’re interviewing you. Ask questions to make sure the job is a good fit for you.”

Kulkarni would agree about the importance of a good fit. “Choose work that you love — it makes the balancing worthwhile,” she said.

Haines spent the last 24 years of his career as founder and principal of Arch Associates Inc., an information systems management consulting firm. He was inspired to gift an endowment for women in engineering by the dearth of females in the field when he was a student in the 1950s, but he continues to see the need for such support today.

“My daughter chose a career as an academic,” he says. “While she works in what some call the ‘soft’ sciences, her analytical and engineering skills serve her well in her field. She continually reinforces the notion that education and the behavior patterns that are part of the educational process are the best ways to truly level the playing field.”

Haines has fond memories of his time at UD, including a lifelong friendship with the late Art Metzner, who Haines calls “a true role model of a professional engineer.”

“We got so much education for so little money,” Haines says. “I think we should do our level best to pay it forward to the kids who follow us.”

One of the young women benefiting from Haines’ gift is Anagha Kulkarni, a doctoral student in UD’s Department of Electrical and Computer Engineering who helped organize the career panel.

“It was extraordinary to see the panelists so willing to act as resources to the 60-plus students who attended the discussion,” she said. “The format of the event helped us to know who the panelists are as people and to get multiple perspectives on the questions asked. They also provided us with a forum to ask questions that we might not have been able to ask our faculty advisers.”

About the Haines Fund

The Richard Coleman Haines and Janet Miller Haines Fund was established in June 2013 by Richard C. and Janet M. Haines. The fund provides unrestricted support for the existing Women in Engineering Program.