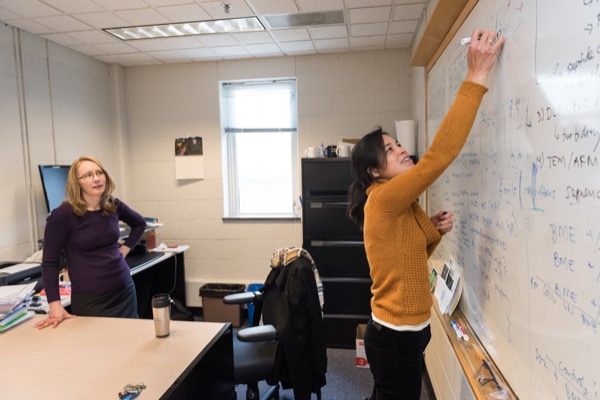 The grants, each worth $45,000, pair young researchers with faculty mentors in studies that support the University’s Strategic Initiative.

There are no promised results with any research and tenacity is an essential part of every such quest but much promising work is under way.

“These are all experiments,” said Christopher Kloxin, assistant professor of materials science and engineering, one of the grant winners. “Research is 95 percent failure, so you have to have a certain mentality to be a researcher. Of 20 days, you might have one good one.”

The UD grants give researchers opportunities to test their ideas and move them to the next level, where additional grant support may be more readily available.

• Catherine Leimkuhler Grimes, assistant professor in the Department of Chemistry and Biochemistry, and her mentor Tatyana Polenova, professor, for studies of the human immune system’s response to bacteria, specifically to identify the molecular mechanisms behind sensing the beneficial bacteria found in the human gut. Misrecognition of these bacteria can lead to Crohn’s disease and other health problems.

• April Kloxin, assistant professor in the Department of Chemical and Biomolecular Engineering, and her mentor Millicent Sullivan, associate professor, for their study of synthetic materials to promote bone regeneration after fractures.

Catherine Grimes’ work focuses on the human body’s immune system and its response to bacteria. The body’s defenses are triggered when enemy cells are identified in bacterial cell wall molecules.

In some cases, though, the immune response is triggered against beneficial bacteria, a problem that can cause continual inflammation, which, in turn, can cause significant health problems, including Crohn’s disease, colitis, asthma, rheumatoid arthritis and gastrointestinal cancer.

Genetic mutation can scramble those messages by changing the receptors that sense the bacteria and produce inappropriate responses to beneficial molecules.

Grimes and her research team are exploring how the human body senses small bacterial cell wall molecules. Specifically, they would like to obtain molecular snapshots of how specific receptors bind to these fragments.

If the normal binding process between these receptors and the bacterial cell wall ligands is understood, researchers may one day be able to prevent the body’s inappropriate response to “good” bacteria, preventing those chronic inflammation problems.

Grimes’ team is using nuclear magnetic resonance (NMR) spectroscopy in its analysis, drawing on the biophysical chemistry experience of her mentor, Polenova, and the state-of-the-art NMR facility housed in the Department of Chemistry and Biochemistry.

April Kloxin is working to test materials that accelerate bone repair, especially to help people with genetic disorders that weaken bones and make it harder for them to recover from fractures and bone surgeries.

Her proposal is to test new materials that mimic the body’s naturally existing collagen and correct genetic defects that would otherwise sabotage or delay the healing process.

Kloxin and Sullivan developed their proposal after visiting the Nemours/Alfred I. duPont Hospital for Children last year to get a better understanding of the problems doctors and their patients faced.

Specifically, Dr. Michael Bober, a pediatric geneticist and authority on skeletal genetic disorders, and Dr. Richard Kruse, a pediatric orthopedic surgeon, wanted a way to promote bone regeneration in children with the disorder known as osteogenesis imperfecta (OI). Bones in patients with OI were slow to recover from accidental fractures or certain reparative surgeries.

Bober said any step toward improving recovery would be enormously significant to the patients and their loved ones.

“We’re talking essentially about people that have normal brains, normal intelligence, almost being trapped in their bodies,” he said. “What can we do to augment their skeletons, whether with medicines, implants, polymers that can help the implants? How can we think about ways to make them fracture less and be able to do more?”

Christopher Kloxin is working to build synthetic polymers — click nucleic acid polymers, specifically — for use in the assembly of hydrogels that can carry medicine to specific, targeted cells.

Click nucleic acids, called CNA for short, are a new development in biotechnology. Kloxin was part of the team that invented CNA while he was doing post-doctoral work at Boulder, Colorado.

He will use the process known as “click chemistry” to create the CNA polymers, then use their unique properties to make hydrogels, which he describes as “locked molecular cages” with medicine inside.

The medicine is released when the hydrogels encounter a cell with the genetic makeup they are designed to interact with. That recognition enables precise delivery of medicine — to cancer cells, for example — without affecting innocent neighboring cells.

The work combines Kloxin’s background in the development of click nucleic acids with his mentor’s research in bionanotechnology, especially in in molecular recognition — the process by which the targeted cell will be identified — and biosensing.

Kloxin’s synthetic CNA polymers have multiple advantages. They are inexpensive, have more chemical and thermal stability, have better capacity for binding with DNA, and are more resistant to damage from other chemicals.

For example, enzymes recognize DNA molecules and immediately start to cut them up. CNA molecules have a different “backbone,” Kloxin said, and so are not targeted by enzymes and are not subject to the same degradation.