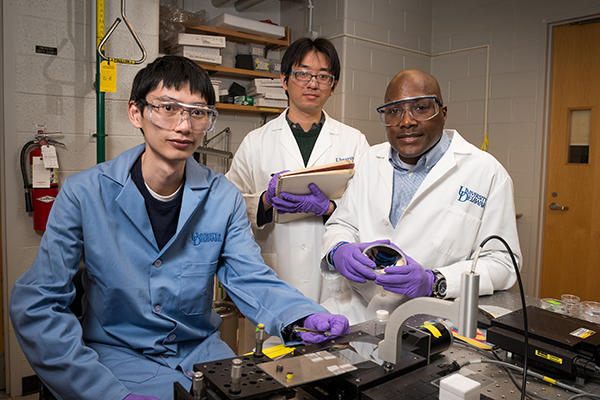 11:54 a.m., April 2, 2015–Most of us have seen dramatic photographs of laptops and even cars that have burst into flames due to failures in lithium-ion batteries. On a much larger scale, battery fires grounded Boeing’s 787 Dreamliner jets for several months in 2013 while the company implemented new features to reduce the risk of overheating and combustion.

The culprit in many of these spontaneous fires is the formation of branching crystalline masses called dendrites that form when lithium batteries undergo repeated charge-discharge cycles. Eventually the crystals “bridge” the cathode and anode, short circuiting the battery and facilitating the generation of sparks that can ignite the flammable liquid electrolyte sandwiched between the electrodes.

To address this problem, a research team at the University of Delaware led by Thomas H. Epps, III, the Thomas and Kipp Gutshall Associate Professor of Chemical Engineering, is designing novel solid electrolytes using tapered block polymers to replace the liquid electrolytes. In collaboration with researchers at MIT, Epps also has helped adapt a surface analysis technique to characterize these nanostructured polymers.

In recent years, block polymers have received considerable attention as viable rechargeable conducting and transport membrane materials due to their unique combination of thermal, mechanical and electrochemical stability.

Epps likens block polymers to trains and train cars on a nanoscale. Just as a train can be made up of various cars — some, like tankers, carrying fluids and others, like flatbeds, bearing solid cargo — the block polymer contains various polymer segments connected together into blocks with different features.

The block polymers used in battery membranes typically consist of a liquid-like block complexed with a metal salt to form ion-conducting pathways as well as a rigid block to resist dendrite formation and confer thermal and mechanical stability.

Epps and his team have taken the concept of block polymers a step farther by tapering the interface, or the transition region between blocks, so that the properties of the different polymer blocks are interspersed.

One critical property for ion-conducting polymers is the glass transition temperature, or the temperature above which an amorphous polymer takes on a more liquid-like character and below which it is “glassy” or solid-like.

Epps and his team have demonstrated that the makeup of the tapered region between polymer blocks significantly impacts that temperature in polymer electrolytes, thus affecting the ionic conductivity.

“Lowering the glass transition temperature by just seven degrees can increase the conductivity of polymer-based electrolytes by approximately 150 percent,” he says. “And if we lower it by another three degrees, we can triple the conductivity.”

A primary challenge in using block polymers lies in controlling and analyzing the location and spatial distribution of the various nanoscale and atomic-scale components in these self-assembling materials. Any methods used to evaluate the materials must be able to “see” the structure at the nanoscale without causing damage that confuses or otherwise confounds analysis.

In collaboration with researchers at MIT, where he spent the 2012-13 academic year on sabbatical as the Martin Luther King, Jr. Visiting Professor of Chemistry, Epps helped apply a new technique, C60+ depth-profiling x-ray photoelectron spectroscopy (XPS), to nanostructured polymers that facilitates the analysis of both chemical and atomic information in a material as a function of depth.

XPS is a surface-sensitive quantitative spectroscopic technique that measures elemental composition in high resolution. Epps and his MIT colleagues employed XPS in which soccer-ball-shaped molecules called “buckyballs” were used to etch through the polymer film, enabling the chemical composition to be probed as a function of depth.

“Now that we have a way to more fully characterize what’s happening at the nanoscale in tapered block polymers, we can design them with the precise properties needed for specific applications,” Epps says.

“Although we’ve successfully applied the technique to evaluate materials for battery applications, we believe that the unique capabilities of C60+ depth-profiling XPS make it a powerful tool for the analysis of nanostructured polymer thin films in applications ranging from energy storage and generation to surface coatings and nanoscale templates.”

The material system studied by Epps and his team comprised mechanically rigid polystyrene (PS) and ion-conducting poly(oligo-oxyethylene methacrylate) (POEM). The work is documented in a paper, “Controlled Ionic Conductivity via Tapered Block Polymer Electrolytes,” published in RSC Advances in 2015. The paper was coauthored by Wei-Fan Kuan, Roddel Remy, and Michael Mackay in UD’s Department of Chemical and Biomolecular Engineering and Department of Materials Science and Engineering.

The characterization work is detailed in a paper, “Determination of Lithium-Ion Distributions in Nanostructured Block Polymer Electrolyte Thin Films by X-ray Photoelectron Spectroscopy Depth Profiling,” published in ACS Nano in 2015. The paper was coauthored by Jonathan Gilbert, Michael Rubner and Robert Cohen at MIT and Ming Luo in UD’s Department of Chemical and Biomolecular Engineering.

The initial work on C60+ depth-profiling XPS is described in a paper, “Depth-Profiling X-Ray Photoelectron Spectroscopy (XPS) Analysis of Interlayer Diffusion in Polyelectrolyte Multilayers,” published in PNAS in 2013.  The paper was authored by Jonathan Gilbert, Michael Rubner and Robert Cohen at MIT.