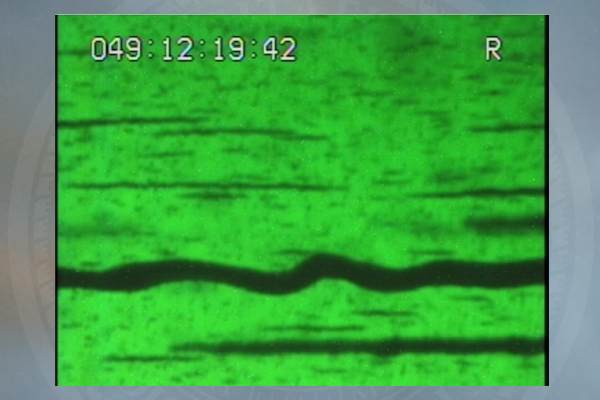 11:35 a.m., March 24, 2015–The great thing about science, says University of Delaware engineer Eric Furst, is that “every question you ask, you start to answer, and end up with 10 more questions.” This is especially true when some of that science is taking place 200 miles above the Earth’s surface, where the relative freedom from gravity makes materials act in surprising ways.

Furst, professor of chemical and biomolecular engineering and principal investigator of NASA’s InSPACE (Investigating the Structures of Paramagnetic Aggregates from Colloidal Emulsions) project, has been sending experiments up to the International Space Station since 2007.

It’s part of his ambition to create new “smart materials” — materials engineered at the nanoscale to have specific properties. Arranging very small particles in specific ways can be difficult and time-consuming, so Furst and his team are investigating how the particles could arrange themselves.

“What we’re looking for,” he says, “are ways of creating new materials with new functions, but in a way that makes their manufacture rapid because it’s based on self-assembly — having small building blocks come together on their own and build that structure for us.” He calls these “genius materials.”

The InSPACE project is using magnetorheological (MR) fluids — tiny magnetic particles in suspension — to study self-assembly. When exposed to a magnetic field, the magnetic particles line up and form chains, so that the mixture becomes almost solid.

MR fluids are already used in shock absorbers in vehicles and even bridges, but Earth’s gravity makes the particles settle to the bottom, making it hard to study exactly how the process works.

Enter NASA. “They were interested in developing the research portfolio of the Space Station,” says Furst. “What kind of experiments can you do in space, what kind of ground benefits will there be?” It’s a whole new laboratory, where gravity has less power. “Having [the MR fluids] in microgravity is the key for us to be able to do these experiments.”

Without gravity to worry about, Furst and his colleagues at NASA’s Glenn Research Center can examine other questions, like exactly how the magnetic field should behave if the particles are to line up neatly and form “suprastructures,” like crystals. Toggling the field on and off allows the particles to find new and better configurations.

“It’s almost like musical chairs,” Furst explains. “You play the music, and you allow people to move around a little bit, and then you allow them to sit back down. If we did that over and over, people would gravitate toward who they want to sit by and what optimizes their interactions.”

Astronauts aboard the Space Station conduct the experiments, and potential projects are vetted carefully based on the benefits they might have for the rest of us. In this case, the investment paid off. “We’ve learned a lot about the process of self-assembly, especially in magnetic fields,” says Furst. “We apply those principles to materials here on Earth.”

One example is his recent work on the propagation of sound waves through a field of self-assembling polystyrene particles, published in the influential research journal Physical Review Letters in November. The tiny particles, shaped like rice grains, line up in response to an electrical field. A film of these particles only transmits acoustic energy in one direction. This type of material might one day be used for color display technologies like e-readers, or in thermal barriers to protect turbine parts from high temperatures.

They’ve also discovered new questions: it turns out gravity was hiding something about MR fluids. On the Space Station, the iron particles line up as predicted in a magnetic field, but when they’re released from that force, they “buckle” and change shape, a behavior not seen before. “Buckling is interesting because of its nonlinearity,” notes Furst. “It would be very difficult to predict without the experiments.”

Last September, Furst and his colleagues published a paper in Physical Review Lettersdescribing this phenomenon and investigating the physics behind it. Furst managed to replicate the buckling in earthbound MR fluids by setting up multiple magnetic fields, bringing the team another step closer to understanding it. Under Earth’s gravity, the magnetic particles are usually sitting against the bottom of their container, and friction may prevent the chains from warping the way they do in space.

InSPACE has another year or so to go, but the results have already advanced the field of self-assembly. “I’m really looking forward to using the insights that we’ve gained from the Space Station for more ground-based work,” Furst says.

His lab is investigating several types of self-assembled materials that can control, block, and direct the flow of different types of energy, leading to technologies such as more efficient lighting. “We think [self-assembly] will allow us to not only make new materials with new functions, but make them faster and cheaper and more ubiquitous. They’ll be important components of making whole devices function the way they do.”