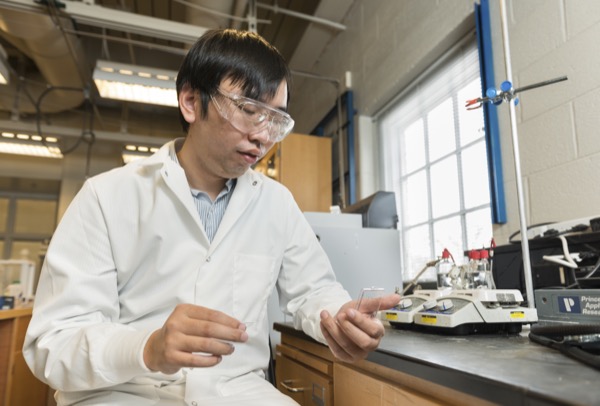 12:49 p.m., March 16, 2015–University of Delaware researchers have discovered a cheap and efficient catalyst for converting water to hydrogen fuel (known as hydrogen evolution), a vital step in making hydrogen a viable and sustainable energy source.

“The rising concerns about carbon dioxide emissions have led to a growing realization that it is not possible to sustain the world’s current development without a substitution of clean and renewable energy,” writes Feng Jiao, assistant professor of chemical and biomolecular engineering and a co-author on the paper published in the current issue of Nature Communications. “Hydrogen is a potential clean fuel for our society.”

Hydrogen has many industrial uses, and is being investigated as an alternative fuel for motor vehicles.

Unlike carbon-based fuels, which emit CO2 on burning, the waste product of running a fuel cell or engine on hydrogen is water. But its use for sustainable energy has been hampered by the methods used to create the hydrogen fuel in the first place.

Industries normally use the steam methane reforming process, which requires natural gas and a lot of energy and produces carbon dioxide as a byproduct. This makes hydrogen fuel costly to produce, both economically and environmentally.

Obtaining hydrogen from water instead of methane, via electrolysis (in which a low-level electric current separates the hydrogen atoms from the oxygen atoms), needs less energy, produces oxygen as a byproduct, and could make hydrogen production much more sustainable.

This requires metal catalysts, which assist with electron transfer and thereby reduce the energy needed to drive the reaction. But the best catalyst for hydrogen evolution has been platinum, which is too expensive to use on a large scale.

As part of a collaboration between UD and Columbia University, Jiao and his colleagues at both institutions discovered a potentially groundbreaking alternative — combining copper and titanium in a way that imitates the structure of a platinum catalyst.

“The catalyst is made of two cheap and abundant elements, [but] its activity is comparable to the state-of-art platinum catalyst,” notes Jiao. The new catalyst is not only more cost-effective but makes the reaction go even faster.

By themselves, copper and titanium are not good catalysts for hydrogen evolution, but combined, they form a unique structure at the atomic scale, similar to that of the platinum catalyst. Moreover, a nanoporosity was created to expose the maximum number of active sites, spots where the reaction can take place.

Certain arrangements of copper and titanium atoms form nonreactive sites, reducing the efficiency, so the ratios and placement of the atoms are tightly controlled.

The bi-metal (copper-titanium) catalyst supports itself structurally, so it doesn’t need to be built each time it’s used, or attached to a conductive surface like carbon. This further reduces the energy penalty for the reaction.

The inexpensiveness and efficiency provide exciting possibilities, says Jiao. “It opens new opportunities to replace expensive precious metal catalysts with cheap ones without compromising the performance.”