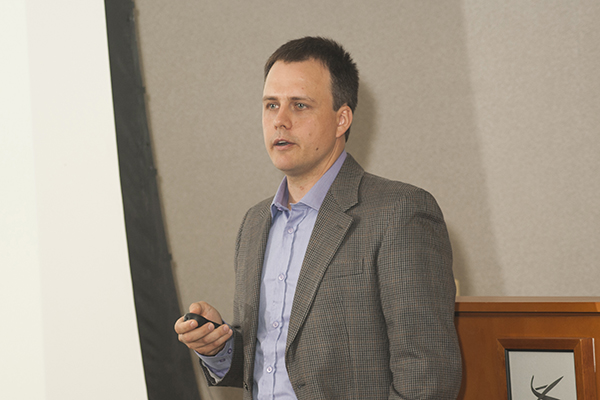 11:40 a.m., Jan. 15, 2015–By giving fellow scientists a window into the inner workings of the cell, Maciek R. Antoniewicz, DuPont Young Professor in the University of Delaware Department of Chemical and Biomolecular Engineering, fuels many researchers’ work in biotechnology and medicine.

For his contribution of experimental, computational and analytic techniques that elucidate cell function, the journal Biotechnology and Bioengineering has selected Antoniewicz to receive its 2015 Daniel I.C. Wang Award.

The award goes to a researcher who received his or her doctoral degree in the last eight years, has published in the journal and has shown commitment to the biotechnology community.

The award comes with a $3,000 honorarium and a published acknowledgement.

Antoniewicz will receive the award this March at a session of the American Chemical Society (ACS) Division of Biochemical Technology during the 2015 ACS National Meeting in Denver.

Antoniewicz and his laboratory study metabolism in microbial and mammalian cells, working on problems relevant to the biofuel industry and to health care.

“The key expertise we offer is that we’re able to look at what’s happening inside the cells,” says Antoniewicz.

They do this by tracking the movement of specific forms (isotopes) of an element — such as carbon-13, which is slightly heavier than ordinary carbon — in the cell.

“We’re developing techniques that allow us to visualize, using isotope tracer techniques, how cells take up nutrients and convert them into useful products,” a field known as metabolic flux analysis, he says.

It can also assist in studies of metabolism in cancerous cells. “With cancer, we’re trying to find targets that will stop the growth of cancer cells but not impact healthy cells,” he says.

Antoniewicz works closely with other labs at UD and beyond, and promotes wider use of metabolic flux analysis as a research tool. “We’ve been able to develop very rigorous computational and analytic techniques that allow other researchers to perform these types of studies,” he says.

His lab has developed a software package called Metran, which researchers can use to study cellular metabolism, and has distributed it to more than 100 labs throughout the world.

Antoniewicz hopes his work will continue to make an impact, saying, “What I’m really excited about is looking at heterogeneous biological systems.”

Until recently, the team has been able to study metabolic flux in only one species or cell type at a time, but that is changing. “We’ve been able to extend our technique to study multiple biological systems grown together — so we can now grow a fungus and a bacterium together and study how they interact with each other.”

New generations of biofuel applications are being developed that rely on such combined systems.

This type of analysis can also be useful for studying diseases like diabetes. “In diabetes, the different tissues (the pancreas, the liver, the muscle and the fat tissue) miscommunicate, cues are misinterpreted, and the system is not functioning optimally. If we can study how multiple cells interact, we can better visualize the development and progression of diabetes, with the goal of eventually finding ways to intervene before full-blown diabetes sets in. I’m most excited about studying more complex biological systems than we’ve been able to do before.”

Antoniewicz will give the Daniel I.C. Wang Award lecture on March 25 at the ACS National Meeting. His lecture is titled “Toward a Holistic Understanding of Cellular Metabolism.”