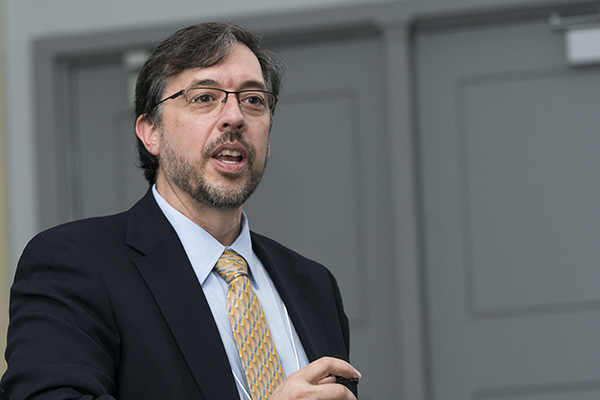 12:35 p.m., Nov. 24, 2014–The University of Delaware’s Norman J. Wagner has been elected a fellow of the American Association for the Advancement of Science (AAAS), the world’s largest general scientific society.

The association bestows the title of AAAS Fellow on members who are selected by their peers for scientifically or socially distinguished efforts to advance science or its applications.

The 401 members selected this year will officially receive the distinction on Feb. 14, 2015, during the AAAS annual meeting in San Jose, California.

Wagner, the Unidel Robert L. Pigford Chaired Professor of Chemical and Biomolecular Engineering, was recognized for distinguished contributions to the field of soft matter and engineering, particularly the fundamentals of colloid and particle science and rheology, and for academic leadership.

Wagner served as chair of UD’s Department of Chemical and Biomolecular Engineering from 2007-12 and directs the University’s Center for Neutron Science (CNS).

His research areas include the effects of applied flow on the microstructure and material properties of colloidal suspensions, polymers, self-assembled surfactant solutions, and combinations thereof.

Wagner’s recent awards include the Bingham Medal of the Society of Rheology (2014) and the American Institute of Chemical Engineers Thomas Baron Award in fluid-particle systems (2013), and election as fellow of the Neutron Scattering Society of America (2014).

He was awarded the Siple Award in 2002 by the U.S. Army for his development of shear thickening fluids for novel energy absorbing materials and is co-founder of STF Technologies LLC, a company commercializing STF-Armor for puncture-resistant surgical gloves.

Wagner has authored or coauthored over 200 scientific publications and patents, serves on the executive committees of the Society of Rheology and the Neutron Scattering Society of America, as well as on the editorial boards of six international journals.

He was named a Senior Fulbright Scholar (Konstanz, Germany) and served as a guest professor at the ETH, Zurich (1997) and the University of Rome (2004).

Wagner will be the featured speaker at the next Delaware Bio meeting scheduled from 5:30-7:30 p.m., Wednesday, Dec. 10, at the Delaware Biotechnology Institute, 15 Innovation Way, Newark.

The American Association for the Advancement of Science (AAAS) is the world’s largest general scientific society and publisher of the journal Science as well as Science Translational Medicine and Science Signaling.

AAAS was founded in 1848, and includes 254 affiliated societies and academies of science, serving 10 million individuals. Science has the largest paid circulation of any peer-reviewed general science journal in the world, with an estimated total readership of one million.