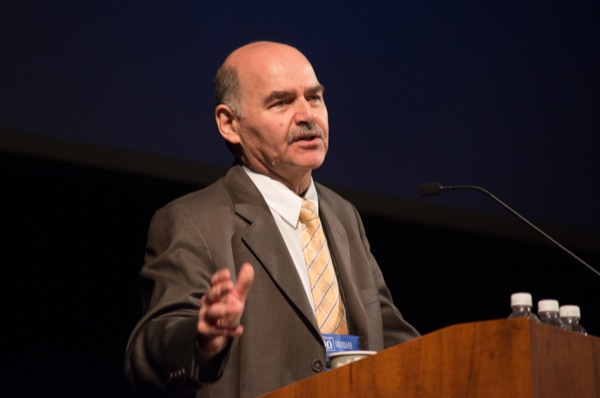 9:18 a.m., Oct. 7, 2014–The University of Delaware Department of Chemical and Biomolecular Engineering celebrated 100 years on campus with a centennial reunion Sept. 19-21. Current and former students came together with faculty to celebrate the department’s past accomplishments and future plans.

While much has changed over the past century, the department’s core values remain the same: to prepare students to become problem-solvers who can contribute solutions to the grand challenges and great debates of our time.

UD alumnus Phil Reiss, a graduate of the Class of 1958, referred to his decision to study chemical engineering at UD as a “wonderful accident” that afforded him “a fantastic education.”

Reiss explained that his UD professors worked their students hard, driving them to their fullest potential, all of which prepared him for a successful 27-year career working for Shell Oil Company. He remembered fondly that there was a great spirit in the department, and that he had great relationships with his professors – both during, and in the years after, his four years on campus.

“Within chemical engineering specifically, there’s a strong sense of family that you get that you won’t find in other majors. We have close interpersonal relationships with graduate students, faculty members and peers,” Galarraga said.

“There’s a lot expected of us here,” added Martin, “And I think that’s what we need to be prepared for the real world. Nothing is handed to us here. If you want to do well, you have to work hard for it.”

About 150 alumni returned for the weekend, and approximately 300 people were in attendance including the alumni, families and faculty. Weekend activities included an open house, campus tours, a welcome reception, interactive sessions on the past, present and future of the department, trips to local attractions and more.

A highlight of the weekend was a departmental history presentation featuring UD alumna Reggie Blaszczyk, author of 100 Years of Innovation: A Legacy of Pedagogy and Research, a book commemorating the department’s history, people and accomplishments. The presentation also included alumni reminiscing their time at UD.

One alumnus who returned to campus for the weekend commemorated the department’s 100th anniversary by giving back in a big way. Bob Gore, a 1959 graduate and 2010 honorary doctor of science degree recipient, and wife Jane generously contributed $3 million to establish the Bob and Jane Gore Centennial Chair of Chemical and Biomolecular Engineering.

Department Chair Abraham Lenhoff, Allan P. Colburn Professor of Chemical and Biomolecular Engineering, called the weekend an opportunity to engage or re-engage alumni with the program.

“This is a privileged job,” said Lenhoff. “There’s a continuous stream of invariably smart but also invariably great young students that come through our programs. We hope that we influence their lives and their careers in a positive way. It is especially gratifying to us when they come back to visit.”

For the next hundred years, Lenhoff said he is looking forward to continuing Delaware’s tradition of excellence. The department, he said, strives to offer mentorship to students and provide individual attention outside the classroom.

“Our first century was a tough act to follow, and we’d like to maintain what we often refer to as ‘the Delaware Tradition of Excellence,’” Lenhoff said. “I think a large part of that requires continued technical excellence but also the continued personal interest and individual attention we’re able to give our students.”