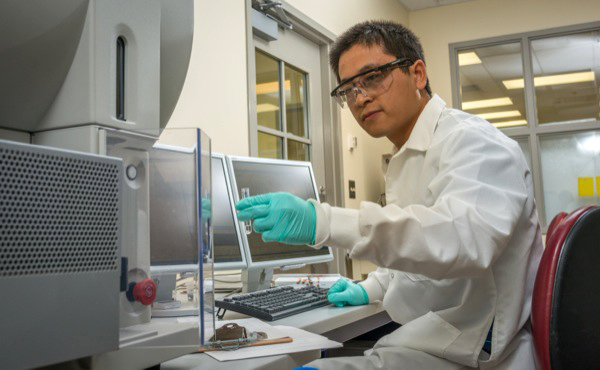 3:22 p.m., Sept. 25, 2014–Platelets are an expensive biomedical commodity. These microscopic cells that come to the rescue when our blood vessels need to be repaired cannot be frozen and are stable for only three to five days at room temperature.

Although platelets are life-saving for accident victims, individuals undergoing chemotherapy, and people with diseases associated with a low platelet count, donated natural platelets are often in short supply, and their use comes with the risk of disease transmission between donors and recipients.

Now, a research team at the Delaware Biotechnology Institute has shed new light on the mechanism of platelet formation, paving the way to accelerating and enhancing their production using stem cells found in bone marrow. A paper detailing the breakthrough appeared as the cover story in the journal Blood on Sept. 25, and a provisional patent application has been filed on the process.

Ironically, a key factor in the team’s success was exploiting what was previously viewed as “cell junk.”

The University of Delaware’s Terry Papoutsakis, who led the work, explains that platelets are produced by megakaryocytes, which are large cells in the bone marrow.

“It turns out that biomechanical forces are necessary for biogenesis of all three types of particles that can be generated from megakaryocytes — pre-platelets, platelet-like particles, and megakaryocyte microparticles,” says Papoutsakis, Unidel Eugene du Pont Chair of Chemical and Biomolecular Engineering at the University of Delaware. “Until recently, these microparticles were viewed as inconsequential cell debris.”

“We now know that they play a significant biological role in platelet formation,” he continues. “The enhanced generation of pre-platelets and platelet-like particles under shear stress correlates with physiological observations — in healthy adults, both acute and prolonged exercise leads to elevated platelet counts. Now, these findings can be used to develop better bioreactor technologies for producing platelets, pre-platelets, platelet-like particles, and megakaryocyte microparticles for transfusion medicine, using stem cells as starting material.”

Unlike platelets themselves, the microparticles can be frozen, which will enable them to be stored and then used for production of platelets on an as-needed basis.

“Knowing that these microparticles have a biological function opens the door to other applications, including genetic therapies,” Papoutsakis says. He credits UD doctoral student Jinlin Jiang with making the breakthrough finding.

Reviewers of the paper, titled “Shear Enhances Thrombopoiesis and Formation of Microparticles that Induce Megakaryocytic Differentiation of Stem Cells,” referred to the findings as “very exciting,” “highly novel,” and even “game changing.”

“The incidence of a disease known as ITP, which stands for idiopathic thrombocytopenic purpura, is on the rise,” says Papoutsakis. “ITP is a bleeding disorder in which the immune system destroys platelets. We’re hopeful that our discovery can break the vicious cycle of this disease as well as other conditions that cause reduced platelet count and cause life-threatening bleeding.”

The paper was co-authored by Jinlin Jiang, a doctoral candidate in UD’s Department of Chemical and Biomolecular Engineering, and Donna Woulfe, assistant professor in the Department of Biological Sciences.

Jiang and Chen-Yuan Kao, who is also a doctoral candidate in chemical and biomolecular engineering, are co-inventors on the patent.

The Papoutsakis lab at the Delaware Biotechnology Institute focuses on systems biology, metabolic engineering, and experimental and computational genomics with applications in stem-cell biology and prokaryotic biology.