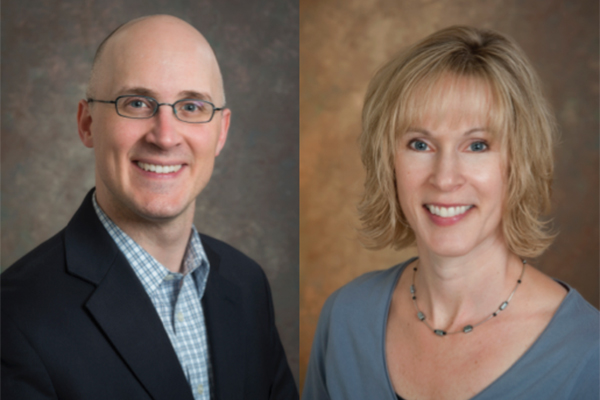 7:48 a.m., July 29, 2014–Eric M. Furst and Kristi L. Kiick of the University of Delaware College of Engineering have been named to the 2014 American Chemical Society (ACS) Class of Fellows.

ACS is the world’s largest scientific society. Conferred annually since 2008, ACS Fellows are nominated by their peers for their outstanding accomplishments in scientific research, education and public service. Only 750 of the society’s more than 161,000 members from academia, industry, government labs and small business have been distinguished with this honor.

This year’s 99 ACS Fellows will be recognized during the ACS National Meeting in San Francisco on Aug. 11.

Eric M. Furst, director of the Center for Molecular and Engineering Thermodynamics (CMET) and professor of chemical and biomolecular engineering, is an expert in the physics and chemistry of “soft” materials such as colloids, polymers and biomolecular materials.

His work aims to create engineering applications for these materials in the areas of energy conversion, nanotechnology, biotechnology and structured and complex fluids. In particular, his research has helped facilitate the development of self-assembling colloid nanotechnology. He has authored 85 journal articles, reviews, and invited perspectives based on his findings.

A member of the American Institute of Chemical Engineers and the American Physical Society, Furst is a previous recipient of the National Science Foundation’s Faculty Early Career Development Award and the DuPont Young Investigator Award. He is a member of the editorial advisory boards of Langmuir and Journal of Colloid and Interface Science.

Kristi L. Kiick, deputy dean of engineering and professor of materials science and engineering and biomedical engineering, joined the UD faculty in 2001 and is an expert in the synthesis, characterization and application of biomaterials. Specifically, her research investigates new materials for drug delivery and tissue engineering, focusing on the development of cardiovascular, cancer and vocal fold therapies.

Kiick also was named a fellow of the ACS Division of Polymer Chemistry this year, where she serves on the organization’s board of directors. She is a member of the American Association for the Advancement of Science (AAAS), the Society for Biomaterials and the Controlled Release Society.

She serves on the advisory and editorial boards for the Journal of Bioactive and Compatible Polymers, Macromolecular Bioscience, Biomacromolecules, Macromolecules and the Nemours Center for Childhood Cancer Research.

She is a previous recipient of the National Science Foundation’s Faculty Early Career Development Award, the Arnold and Mabel Beckman Foundation Young Investigator Award and the DuPont Young Professor Award. Kiick is the author or editor of eight books, book chapters or edited journals and more than 80 papers, and holds 17 U.S. patents.