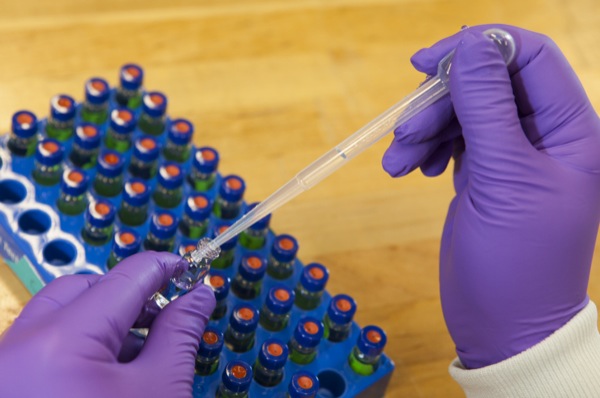 11:10 a.m., June 24, 2014–The University of Delaware has received $12 million in funding from the U.S. Department of Energy to continue its Catalysis Center for Energy Innovation (CCEI), an Energy Frontier Research Center (EFRC) that is developing technologies to convert biomass to biofuels and chemicals.

UD was one of 32 EFRCs selected for funding totaling $100 million to further fundamental advances in energy production, storage and use, DOE announced in a press release. CCEI is one of 22 centers selected for continued funding from among the original 46 EFRCs funded in 2009, and one of 23 university-led projects.

“This new four-year funding will enable CCEI researchers to build upon the foundations set in the first funding period and further the catalytic technologies that can transform widely abundant plant biomass into renewable chemicals and fuels,” said Dionisios Vlachos, CCEI director and Elizabeth Inez Kelley Professor of Chemical and Biomolecular Engineering.

“CCEI’s research has the potential to replace costly enzyme-based processes with more robust and economically viable solid catalysts. Expanding the portfolio of biomass-derived chemicals and fuels can have a major impact on the economy and the environment.”

Breakthrough catalytic technologies to emerge from CCEI include a one-pot process developed in 2010 using Tin-Beta, the first heterogeneous catalyst to convert glucose into fructose and hydroxyl-methyl furfural. This is the first step in the production of a large number of targeted products including biofuels and biochemicals.

In 2012, a CCEI research team developed a new process to produce high yield (greater than 90 percent) p-xylene from renewable biomass. The p-xylene is used to produce a plastic called PET (polyethylene terephthalate), which is currently used in many products including soda bottles, food packaging, synthetic fibers for clothing and even automotive parts.

Significant advances by CCEI researchers in multiscale materials synthesis and multiscale modeling have enabled other technological breakthroughs including the production of phthalic anhydride — an industrial chemical — and alkylated furans for fuel additives from furanics with greater than 80 percent yield.