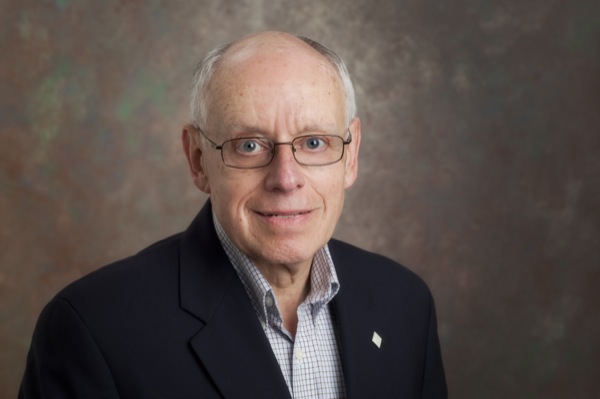 11:20 a.m., June 10, 2014–Stan Sandler is arguably one of the most decorated faculty members at the University of Delaware.

He is a member of the National Academy of Engineering, and he has received numerous awards, including being named one of the top 30 chemical engineering authors by the American Institute of Chemical Engineers.

But Sandler remembers a time when awards were the farthest thing from his mind — as a freshman at City College of New York in 1958, his only hope was to “eventually exit the lovely Morningside Heights campus with a college degree.”

Sandler recalled that story and others from his life as the child of recent European immigrants when he was preparing to receive his latest honor, the Career Achievement Award from the Engineering Alumni Association of his alma mater.

It has been a career that has drawn inspiration from a quotation from American historian Henry Adams: “A teacher affects eternity; he can never tell where his influence stops.”

Sandler grew up in an apartment on the Upper East Side, and he remembers as a child playing with a chemistry set in the bathroom. “Small explosions fascinated me,” he said. “I guess that’s why I chose to study chemistry at Brooklyn Technical High School.”

“As I was nearing graduation,” he continued, “I dreamed of leaving home for college. That notion was quickly quashed by my family’s financial situation. My choices were limited to Brooklyn Polytech, Cooper Union, or CCNY. City College most appealed to me, and my parents were in favor of my choice, since attendance was free and I could live at home. After I won a New York State Regents Scholarship, I was actually paid $250 a year to attend CCNY.”

When Sandler was a student there in the late ’50s and early ’60s, the school did not have a graduate program, and the curriculum was not research-based. The faculty was made up of retirees from industry, some part-timers who continued to work in industry, and various consultants.

“Bob Pfeffer had spent a summer at the University of Wisconsin studying the new, path-breaking chemical engineering textbook, Transport Phenomena, and in his classes he conveyed to us what he had learned from this paradigm-changing book,” Sandler said.

Pfeffer would go on to play a vital role in Sandler’s academic career.

“In my senior year, he encouraged me go to graduate school — a possibility that had never before occurred to me,” Sandler said. “I had no idea what one studied in graduate school or that an assistantship would make such a choice financially viable. Not until I held a summer job at Texaco did I discover chemical engineers who had earned Ph.D.’s and were conducting research. It was then that I decided to follow Bob Pfeffer’s advice and apply for graduate school.”

As a grad student at the University of Minnesota, Sandler was required to take five preliminary examinations. He struggled through most of them but failed thermodynamics, which, ironically, would end up becoming his academic specialty.

A lesson from Pfeffer came to the rescue when Sandler was on his third — and last — attempt at the exam.

“I had a kind of epiphany,” Sandler said. “The important principle I had learned from Bob Pfeffer was to begin each problem by writing down the same general equations and then eliminating the terms in each equation that were not applicable. What remained were the equations to be solved for the specific problem at hand. Suddenly it all made sense!”

When Sandler took the exam for the third time, he earned a perfect score.

About a decade later, he decided that since he had taught himself how to solve thermodynamics problems, he should share what he had learned with others. The result was the first edition of his textbook, Chemical and Engineering Thermodynamics, which is now in its fourth edition, has sold over 100,000 copies, and has been translated into a number of foreign languages.

In 1967, Sandler joined the University of Delaware, where he is now the Henry Belin du Pont Chair of Chemical Engineering.  In addition to his teaching and research at UD, he has consulted on a number of projects, including the destruction of armed chemical weapons and the encasement of radioactive wastes left over from the production of plutonium for nuclear weapons during World War II and the Cold War.

“Projects like these are far removed, to say the least, from 138th Street and Convent Avenue, where I arrived as a bewildered freshman,” he said.

“Bob Pfeffer had no reason to think that the undergraduate he encouraged would ultimately be involved in destroying weapons of mass destruction or in educating future generations of chemical engineers. The engineers I have taught will undoubtedly forge careers and take on projects that go far beyond anything I myself can imagine.”

From his experiences at CCNY, Sandler understands the tremendous influence that one person can have on another.

“My academic career continued beyond CCNY largely because one faculty member, in a department dedicated to the needs of its students, took a personal interest in my education,” he said. “A good teacher, who takes a well-organized, structured approach to a subject, can have an impact well beyond the specific course he or she is teaching.”

And with that, Sandler was back to the quotation with which he began:  “A teacher affects eternity; he can never tell where his influence stops.”