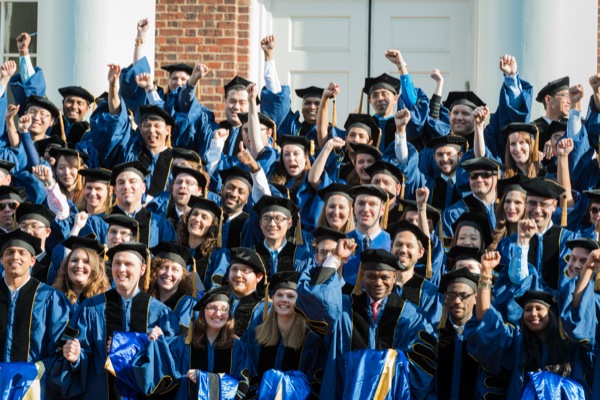 4:30 p.m., May 31, 2014–Amid whoops and bursts of applause, the University of Delaware welcomed 195 new academic doctors into the world on Friday, May 30, during the doctoral hooding ceremony held on The North Green.

After the degree candidates and their advisers, led by a bagpiper, processed into the towering white tent in front of family and friends, James Richards, vice provost for graduate and professional education, greeted the crowd in multiple languages.

Of the 140 doctoral degree candidates present (55 others had completed their degree requirements earlier in the year and already had started new careers), 71 were from the United States and 69 were from other countries. They would be formally invested in the velvet-lined hoods marking academia’s highest degree — UD awards the doctor of philosophy, doctor of education and doctor of physical therapy.

Richards said the youngest doctoral recipient present was 25 years old, and the most experienced was 52. Two married couples were receiving doctorates: one duo in chemical engineering, and the other in physics. And 10 degree candidates had even more to celebrate in addition to their sheepskins, with birthdays within a week of the ceremony.

Richards acknowledged the students’ hard work and congratulated them on their achievements, noting, “Because of your efforts, you are among the most educated in the world.”

He encouraged them “to keep in touch because you are a part of our family. You are very important to us.”

University President Patrick Harker applauded the students, thanked their support network of families, friends and academic advisers, and offered three suggestions for the future: “Be open, be useful and be grateful.”

Harker urged the new doctorate holders to follow their curiosity and to be open to new opportunities and challenges even if dramatically different from their current path.

He encouraged them to be useful: “Apply not just the content of your work, but apply it to change the character of conversations.”

Harker also urged them to be grateful for the academic tradition they are now part of. “Your work will be the scaffolding for new generations.”

Lenhoff spoke about how the generation of knowledge through research breathes life into teaching, preventing it from becoming “old and stale.”

“You created your doctoral thesis and you are the world expert on it,” he said. But, his advice was to “continue learning.”

Lenhoff pointed out that when he came out of graduate school, a “website” had to do with spiders.

He spoke with admiration about his colleague Bob Bird, a leader in the field of chemical engineering and recipient of the National Medal of Science, who knows multiple languages and is still writing books at the age of 90.

In addition to keeping up with their professional fields, Lenhoff urged the students to “keep up with society.”

“Please make sure your voice is heard in the public square on issues in which you are expert,” Lenhoff said.

As the degree candidates were called to the stage for the formal hooding and awarding of diplomas, Mary Martin, associate vice provost, provided insight into their depth of curiosity, sacrifice, and promising futures.

Stephanie Russo concurrently received a Ph.D. in biomechanics and movement science from UD and a medical degree from Drexel University. She is now a resident in orthopedic surgery at the University of Pittsburgh’s Hamot Medical Center.

Completing both degrees simultaneously “has been an opportunity that has changed the course of my career and life for the better,” Russo said.

Nada Alzahrani’s parents came from Saudi Arabia to attend the ceremony and celebrate her doctorate in educational leadership. She had not seen her family since she came to the University five years ago. The mother of four is returning to Saudi Arabia to teach.

Richard Stansfield, the recipient of a doctorate in sociology, says he will now “gladly repay all the free meals I have taken from colleagues, friends and family over the last few years.” He soon will begin a new academic career as an assistant professor of criminal justice at Rutgers University-Camden.

After attending the past five doctoral hooding ceremonies to keep herself motivated, Kate Gurnon said it “feels extraordinary!” to receive her doctorate in chemical engineering. “To finally be participating in the hooding ceremony after years of hard work toward my dissertation means that I have achieved my goal!” She begins her career at GE Global Research in Nikayuna, New York, this summer.

Janet Bertoni Josephson, assistant professor of special education at Millersville (Pennsylvania) University, found a good way to de-stress as she worked on her Ph.D. in education — she and her husband fostered 33 dogs from high-volume shelters in the Philadelphia area.

Zhan Yu, who received his doctorate in computer science, will begin his career as a research associate at Adobe Systems Inc. He said simply, “The past four years have been the greatest experience of my life.”

James Hiebert, the Robert J. Barkley Professor in the School of Education.

• UD held its 165th Commencement ceremony under sunny skies on Saturday.
• Follow the conversation on social media by checking out UD’s Commencement Storify page.
• See Commencement photographs at UD in Photos.
• A video of Commencement is available.
• Honorary degrees were presented to four outstanding individuals.
• Ten members of the Class of 2014 were honored as high index seniors, with perfect grade point averages.
• Commencement was thrice as nice for the Manning family.
• The UD Honors Program held a celebratory breakfast on Friday.