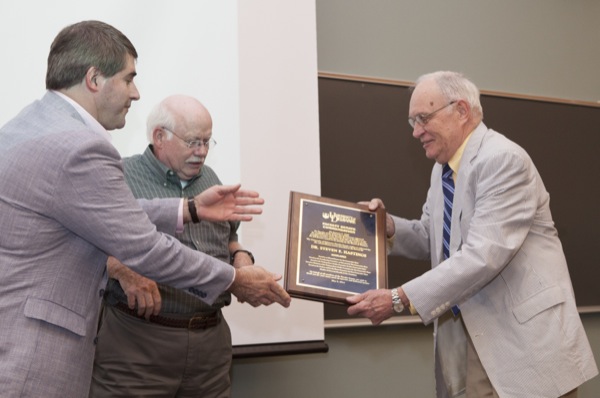 9:52 a.m., May 7, 2014–The University of Delaware Faculty Senate unanimously approved a resolution recommending that the University not proceed with the construction of The Data Centers project with a power-generating facility on the Science, Research and Advanced Technology (STAR) Campus.

The resolution, which was approved by a 43-0 vote with eight abstentions, came during the last regular meeting of the spring semester, held Monday, May 5, in Gore Hall.

Michael Chajes, professor of civil and environmental engineering and author of the amended substitute resolution, addressed an audience that included members of the UD faculty and state and local elected representatives.

“This resolution speaks to the core values of our University,” Chajes said. “As a local resident, it is something I feel very passionate about, and regardless how it comes out, I think it is inconsistent with what we stand for.”

The resolution addressed concerns regarding the amount of CO2 that would be generated by the proposed 248-megawatt gas-fired power plant as being inconsistent with UD’s commitment to reducing its carbon footprint, Chajes said.

“We haven’t had a sustained discussion when we are talking about core values,” Chajes said. “We need to have these discussions.”

Newark City Council members who spoke briefly included Robert Gifford of District 3 and Margrit Hadden of District 4. State Rep. John A. Kowalko Jr., who represents Newark south in Legislative District 25, also spoke to members of the senate about the project.

The Data Centers LLC has proposed a data storage and management center on the STAR Campus that would include a cogeneration facility to supply power. UD has formed an internal working group as part of its continuing evaluation of the proposed construction and operations plans.

A special guest at Monday’s meeting was Jon Olson, the first president of the Faculty Senate. Galileo introduced him and announced that the senate’s Excellence in Service Award has been renamed, in his honor, the Jon Olson Faculty Senate Exemplary Service Award.

Olson then presented the newly named award to this year’s recipient, Steven E. Hastings, professor of applied economics and statistics.

Provost Domenico Grasso updated senators on admissions and offered a look at the Class of 2018.

“We have had an exciting conclusion to our admissions season this year,” Grasso said. “Our yield of non-resident students is up from 18 percent to 21 percent. We have over 4,200 deposits, and we hope to matriculate 4,060 students, which is 185 students over our target of 3,875 students.”

“The Class of 2018 will be the second most diverse class ever, with 22 percent being students of color,” Grasso said.  “The number of honor students also increased dramatically to 26 percent.”

“There are over 100 partners,” Grasso said. “This is very exciting and is being led by Jack Gillespie. The title is ‘Clean Action Manufacturing Innovation Institute for Composite Materials Construction.’”

The issues of changing titles for new faculty members who will hold non-tenure track positions also was addressed by Grasso, who referred senators to a letter posted on the Provost website.

“After reviewing an External Review Committee report, the Faculty Senate Responsibility Based Budget Report and other relevant documents, and holding multiple meetings, the RBB task force formulated a set of recommendations to guide the development of the new RBB model,” Brickhouse said. “The recommendations address the distribution of revenue, the use of centrally allocated funds and support for central administrative units.”

Sparks noted that the interim report represents the first step in achieving greater transparency and clearer communication regarding how budgetary decisions are made to advance excellence in academic and scholarly activity at UD.

The final report is expected to be completed by Feb. 1, 2015, and will be published on the Office of the Provost website.

Requests to revise the related work requirements of the BA in sociology, the domestic prevention and services concentration within the women and gender studies major, and to add math options to the BA in economics education and add honors majors in environmental science and environmental studies, also gained approval.

Requests to revise the BS majors in management information systems, economics, finance, computer science, add math requirements to the BS major in food and agribusiness management, and to add an undergraduate certificate program in premedical health, were approved.

A request to revise the math requirement for the economics concentration, economic theory and econometrics, was approved.

Also approved were requests to revise the professional science master in biotechnology and the master of science in biological sciences concentration, molecular biology and genetics, and to create a concentration for the master of education in exceptional children and youth.

During the regular agenda portion of the regular meeting, senators gave the green light to granting permanent status for the bachelor of arts degree in public policy and environmental studies.

Galileo thanked all members of the senate and senate committees for their work over the year.

“The senate has transacted much business and has accomplished quite a lot,” Galileo said. “The University could not function without your service.”

Galileo also remarked on his experience serving as senate president.

“It has been an awesome responsibility to be senate president. Nothing I have done up to now prepared me adequately for this job,” Galileo said. “I hope, however, that I at least was able to approach your expectations.”