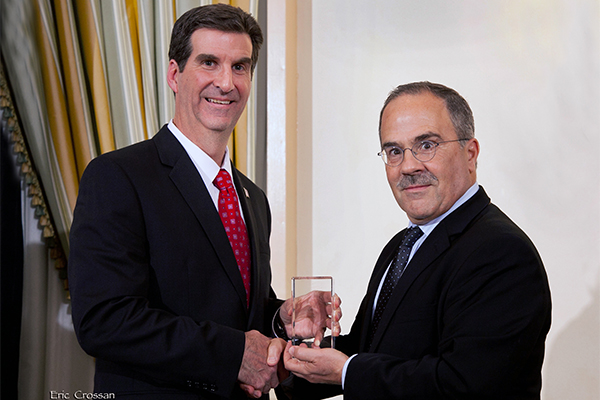 1:22 p.m., April 28, 2014–Terry Papoutsakis, Eugene du Pont Chair of Chemical and Biomolecular Engineering at the University of Delaware, only needed to scan the room at Delaware Bio’s 2014 annual awards gala to see just how deeply the roots of the bioscience community stretch in Delaware.

About 300 of the area’s top leaders in science, academics, industry and the medical community gathered inside the DuPont Country Club for the seventh annual event that honors the work being done by local individuals, companies and educators to foster the state’s bioscience community.

“There’s a lot of activity and innovation in the life sciences here,” said Papoutsakis, “and it’s nice to show appreciation for it, as well. It is really engrained in our culture.”

Papoutsakis was among those recognized during the sold-out event, the largest annual gathering of Delaware’s bioscience community. He received the Delaware Bio Academic Research Award, sponsored by Delaware IDeA Network of Biomedical Research Excellence (INBRE). The award recognizes significant contributions to the advancement of life science research at an academic or medical research institution in the state.

Given its reputation for drawing some of the biggest innovators in the Delaware, the event also offers a valuable networking opportunity to grow and develop local research partnerships that can translate into improvements in medical products and patient care.

“More than half of the attendees are key decision makers in their companies, making it an elite group with the potential to shape research direction and policy,” said Bob Dayton, president of Delaware Bio, a nonprofit trade association dedicated to promoting the First State’s bioscience industry.

“It’s the only setting where you get this kind of leadership together,” Dayton said. “You don’t get that just anywhere.”

The Delaware Bio awards recognize outstanding contributions within the state’s bioscience community. This year’s honorees also included Gov. Jack Markell, who was singled out for his efforts to promote innovation and the local bioscience community; Agilent Technologies, lauded as company of the year; Jennifer Kmiec, who received the service award for her work with tech-based economic development initiatives in Delaware; Sean X. Wang, CEO of B&W Tek, recognized for his entrepreneurial successes; Venu Kalavacharla, a Delaware State University professor selected as the higher education educator of the year; and Brian Gross, a UD alumnus and biology teacher at Delcastle Technical High School named K-12 educator of the year.

For Katia Sol-Church, who was attending her first Delaware Bio awards gala, the event was a reminder of the commonality in the life sciences community, despite varying backgrounds. The richness is worthy of accolades.

“It keeps us from being stuck in our own silos,” said Sol-Church, director of the biomolecular core lab at Nemours/Alfred I. duPont Hospital for Children. “We may have differences in how we approach things, but we’re looking in the same direction.”