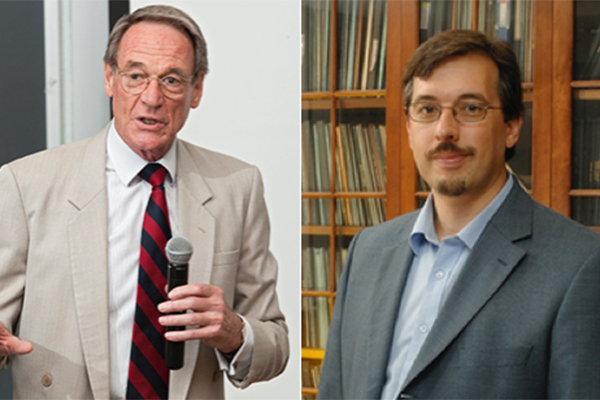 10:32 a.m., March 6, 2014–University of Delaware professors Henry Glyde and Norman Wagner have been selected as fellows of the Neutron Scattering Society of America(NSSA).

Founded in 1992, the NSSA has more than 1,000 members worldwide who help promote neutron scattering research. Designation as an NSSA Fellow distinguishes Glyde and Wagner among the top one half of one percent of their peers.

Glyde, Unidel Professor of Physics and Astronomy, was nominated for “seminal contributions to the understanding of liquid and solid helium using neutron scattering and for chairing the committee that founded NSSA.” A UD faculty member since 1982, Glyde’s research focuses on neutron scattering, low-temperature physics and quantum fluids and solids.

Wagner, Alvin B. and Julia O. Stiles Professor of Chemical and Biomolecular Engineering, was nominated for “outstanding scholarship in neutron scattering methods applied to soft matter science” as well as education and academic leadership and service.

Wagner, who currently directs the Center for Neutron Science (CNS), is known for developing new neutron scattering methods used internationally along with his work with STF-Armor, a novel nanocomposite co-invented with U.S. Army Research Laboratory scientists.

The professors will be inducted during the American Conference on Neutron Scattering in Knoxville, Tenn., in June.

In anticipation of UD’s Neutron Day on March 24, UDaily talked with Glyde and Wagner about the relevance and real-life applications of neutron science in today’s world.

Q: Neutron science — what is that really?

Wagner: Neutrons are subatomic particles that, along with protons and electrons, are the basic building blocks of atoms. Similar to X-rays, which we are all familiar with from medical imaging, neutrons can be used to image materials and also determine the atomic and nanoscale structure of materials through diffraction. At UD, the faculty and students of the Center for Neutron Science are developing and using neutron diffraction and imaging techniques to investigate the fundamental structure of matter for a wide variety of scientific and engineering reasons.

Glyde: Neutron scattering enables us to develop a molecular level understanding of proteins and relate specific dynamic processes to protein function and drug acceptance. Neutrons are also used to study magnetism at nanoscales not currently possible with any other technique.

Wagner: In short, at UD we use neutron scattering to develop advanced nanomaterials for protective applications and tissue engineering, better biopharmaceuticals and methods of drug delivery, better health care products, catalysts for energy production, membranes for fuel cells and batteries, and new materials for organic photovoltaic devices, just to name a few applications.

Q: Is this a global field?

Wagner: Thousands of scientists and engineers engage in neutron scattering at major government laboratories, universities and industrial research laboratories worldwide. Although expensive, countries are investing in both improvements and new facilities because these methods are essential to advancing our knowledge of atomic and nanostructure of materials. Recently, the U.S. invested over $1 billion into the new Spallation Neutron Source and over $100 million into NIST for expansion – a project with UD scientists, engineers, and computer programmers currently working at the National Lab (NIST). UD co-designed and built instruments are available at NIST and at a leading European laboratory for use by researchers worldwide.

Q: How is UD a leader in neutron science?

Glyde: The NSSA was founded by a committee based here at UD 22 years ago, and UD faculty have often studied science using neutrons at major neutron facilities. This early experience at UD made “suitcase” science using world-class facilities a natural way to do world-class science.

Q: How does UD neutron science research contribute to the national nanotechnology initiative?

Wagner: UD researchers are among the world’s leaders for our use of neutron scattering in soft matter. We benefit greatly from our proximity and strong collaborations with the NIST Center for Neutron Research (NCNR), but also use facilities across the globe including Oak Ridge National Laboratory (ORNL) in Tennessee and the Institute Laue-Langevin in France.

The CNS, funded through cooperative agreements with the NCNR, provides support for future innovators — UD students, postdocs, faculty and undergraduate researchers — to use neutron scattering methods in their research.

Q: What is the future of this field?

Glyde: The future is bright. New facilities such as at ORNL have recently been built and existing facilities are continually being upgraded. There are new multinational facilities coming online in Europe and there is massive growth in China and Japan. There is really no replacement technique for neutrons, so funding agencies will favor science that draws on these major scientific resources.