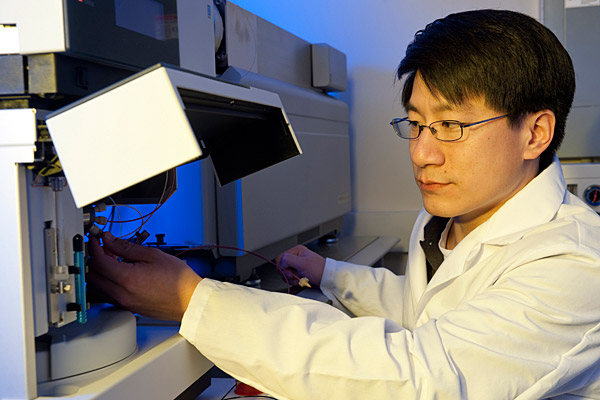 Now, on the 75th anniversary of Colburn joining the University of Delaware faculty, Kelvin H. Lee, Gore Professor of Chemical and Biomolecular Engineering and director of the Delaware Biotechnology Institute (DBI), has been selected as AIChE’s 2013 Professional Progress Award recipient.

“The Professional Progress Award is one of the most competitive awards within the AIChE and our department is fortunate to have outstanding faculty such as Kelvin continuing our tradition of excellence,” said Abraham Lenhoff, chemical and biomolecular engineering department chair and Allan P. Colburn Professor of Chemical Engineering.

Lee, who joined UD in 2007, was the first chemical engineer to do extensive research in the field of proteomics, the study of proteins and their broader role in living organisms. His research and interest in the field began as a member of Cornell University’s faculty, where Lee established and served as director for one of the first proteomics programs in the nation.

Because of his advanced proteomics work, Lee and his team have sought to tackle some of the toughest problems facing society by combining chemical engineering principles with the life sciences.

“It is humbling to have the hard work of students, staff and postdocs over the years be recognized with this honor,” Lee said.

Lee’s recent research focus has been on the diagnosis and treatment of Alzheimer’s disease. His most notable discovery is a new diagnostic test that is able to diagnose Alzheimer’s in living patients, something that previously could only be accomplished post-mortem.

He also helps organize an international, academic-industry-government effort in sequencing the genome of the cell type used to manufacture protein therapeutics, a $60 billion per year industry.

He has also been instrumental in facilitating the impact of DBI, where he has served as director since 2008. Lenhoff commented that while in this role, “Kelvin has brought excellent strategic judgment and leadership to the Delaware Biotechnology Institute, multiple professional organizations and the broader life sciences community in Delaware.”

Lee earned his doctoral degree in chemical engineering with a minor in biology from the California Institute of Technology in 1995 before joining the faculty at Cornell University in 1997.