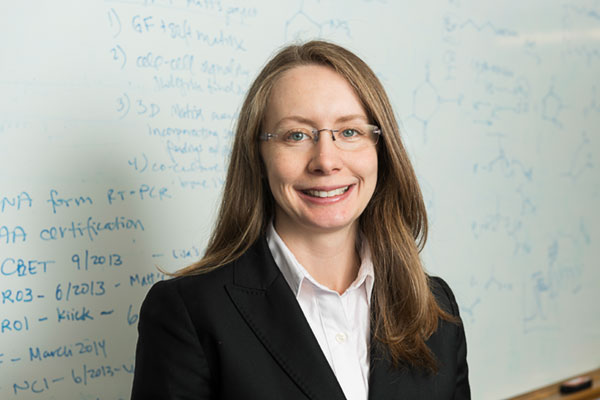 10:35 a.m., June 13, 2013–April Kloxin, a University of Delaware chemical and biomolecular engineer whose research is pushing the boundaries of what is known about fibrosis, has been named a 2013 Pew Scholar in the Biomedical Sciences by the Pew Charitable Trusts.

Kloxin, one of only 22 scholars selected across the United States, is the second UD professor to receive the award, which recognizes enterprising early-career scientists who are researching perplexing health problems. Salil Lachke, assistant professor in biological sciences, was named a Pew Scholar in 2012.

As part of the award, Kloxin will receive $240,000 in unrestricted funds over four years to investigate the progression of fibrosis, a condition that occurs when excess connective tissue builds up in the body, resulting in increased tissue stiffness, and ultimately, loss of function. In particular, she will explore the biology of lung fibrosis, a debilitating and sometimes fatal condition that can be triggered by viral infections or other insults, but is known to occur without a definitive cause.

Kloxin will study signals within the extracellular matrix of connective tissue that regulate the development of lung fibrosis. She will develop a unique three-dimensional culture platform to better understand the disease’s pathobiology and to identify new therapeutic targets and timeframes for treating the condition.

“The Pew Scholars program gives innovative scientists both the freedom to take calculated risks and the resources to pursue the most promising, but untried, avenues for scientific breakthroughs,” said Rebecca W. Rimel, president and CEO of Pew. “Pew funding provides an ‘insurance policy,’ allowing our scientists to be adventurous with their research. Though their scientific fields are diverse, their commitment is uniform: harnessing scientific discovery to improve human health.”

“Identifying these signals could facilitate a paradigm shift for future in vitro tissue studies, and provide new targets for therapeutic interventions,” she said.

Kloxin earned her doctoral degree in chemical engineering from the University of Colorado in 2009. She conducted post-doctoral research with the Howard Hughes Medical Institute from 2009-11, where she worked with biologists and medical researchers to understand biological problems relating to heart valves, muscle stem cells and lung alveoli.

About the Pew Scholars program

Launched in 1985, the Pew Scholars program has granted more than $120 million in funding to more than 500 early-career scientists researching the basis of perplexing health problems. The program aims to provide enterprising young researchers with unrestricted funding to pursue promising, but untried, avenues for scientific breakthrough. The initiative is run by Pew, which also directs the Pew Latin American Fellows in the Biomedical Sciences, a program that for 22 years has provided support to young Latin American scientists receiving post-doctoral training in the United States.