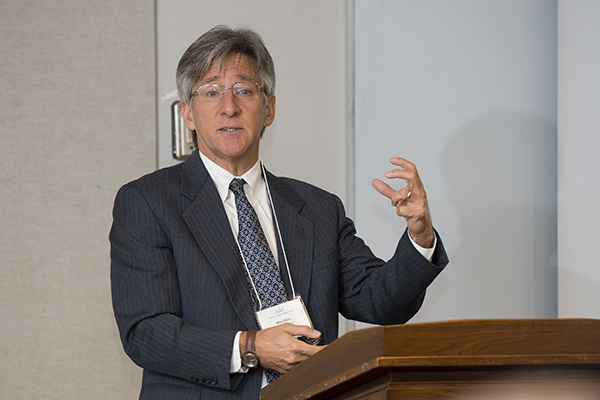 1:36 p.m., May 14, 2013–In the face of sequestration, it is a fact that funding sources for research are dwindling. Yet research is still needed to address the world’s global energy challenges.

According to Michael Klein, director of the University of Delaware Energy Institute(UDEI), biomass, wind, solar, fuel cells, etc., all have a part to play in future energy solutions. UDEI’s role is to bridge the various academic disciplines that support these energy areas and get people working together.

“The energy landscape is supported by energy researchers with wide-ranging, often non-overlapping backgrounds. There is no single science base to energy,” Klein said, “but to develop energy solutions we need coherent, functional teams. So in the UDEI, we are trying to catalyze the development of inter-departmental, inter-institutional teams that can compete for multi-year, high dollar grants that really will make a difference.”

This is one of the reason’s UDEI established its annual energy symposium, now in its sixth year. The event, which takes place Wednesday, May 15, at Clayton Hall on UD’s Laird Campus in Newark, includes a half-day conference detailing advances in energy conversion, catalytic science, carbon-free power and fuel cells, among other things, followed by a focused workshop on next generation photovoltaics.

“You can’t propose to form a team after receiving a major grant. The team needs to be in place to secure funding in the first place,” remarked Klein. “We’re getting the broad energy solutions-oriented teams ready, with some demonstrated results, so that when proposal opportunities arise, we can say ‘here is our track record of success.’”

In 2012, UDEI began offering topical workshops to connect people within their various specialties — inside and outside the University. Workshops focusing on wind and fuel cellshave already taken place. Future workshops include topics in solar, biomass and unconventional carbon based resources.

UDEI is also working to identify knowledge gaps and provide resources to fund faculty, largely at UD, to study these deficiencies. The institute is building community partnerships that will strengthen and prepare teams to address these issues, too.

“There are 250 people across campus engaged in energy research, many of whom do not know one another. ISE Lab will change that in a meaningful way. The stronger these future intercampus connections, the stronger our connections to the outside world will become.”

In some instances, these connections are already happening. As UD wind, fuel cell and solar researchers introduced themselves at a recent meeting concerning the Department of Energy’s Clean Energy and Manufacturing Initiative, Klein heard people asking, “Are you going to ISE Lab?” It was a revealing question that led to several people learning that they will be neighbors.

This, he said, is an important step in leveraging UD’s research talent toward future energy solutions. “We have to be a team before the outside world will pay attention to us,” concluded Klein.