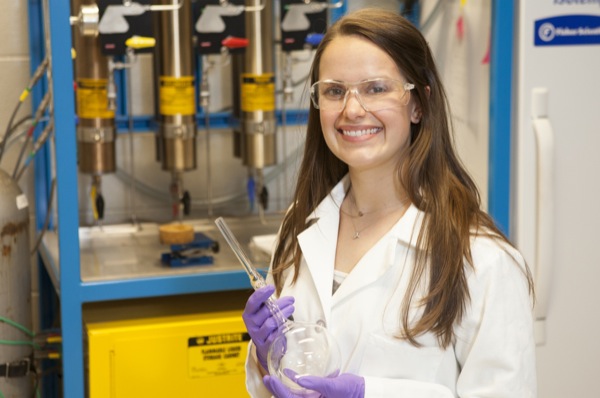 1:11 p.m., May 14, 2013–Elizabeth Kelley, a fifth year graduate student in the University of Delaware’s Department of Chemical and Biomolecular Engineering, will have the opportunity to share her research on targeted drug delivery at the 63rd Lindau Nobel Laureate Meeting to be held June 30-July 5 in Lindau, Germany.

Kelley’s selection to the annual international meeting, which focuses on promoting the global spread of knowledge in the areas of chemistry, physics and physiology, affords her the prestigious opportunity to discuss research with 35 Nobel Laureates and 625 other young researchers in an open conference setting. The theme for this year’s meeting is chemistry.

Among the Nobel Laureates expected is Akira Suzuki of Japan’s Hokkaido University, who alongside University of Delaware’s Richard Heck, earned the 2010 Nobel Prize in Chemistry. Heck retired from UD in 1989 as the Willis F. Harrington Professor Emeritus of Chemistry and Biochemistry.

“Her natural curiosity about how things work, paired with a research process that is far more mature than her actual years of experience, makes Liz an outstanding candidate for the 2013 Lindau Meeting,” Millicent Sullivan, assistant professor of chemical and biomolecular engineering and Kelley’s graduate co-adviser, said. Kelley is also co-advised by Thomas H. Epps, III, Thomas and Kipp Gutshall Professor of Chemical and Biomolecular Engineering.

Kelley was selected for her research on the development of novel polymeric materials that can be used to package and deliver medicine. The nanoscale structures encapsulating the medicine enable therapeutic molecules to be released within cells in diseased tissues. These types of approaches are especially beneficial for drugs such as chemotherapies, which have serious side effects if released within the wrong cells or tissues.

“This will be a unique opportunity to discuss the broader impacts of science on society and to understand our role as the next generation of scientists by interacting with this select group of researchers,” Kelley said.

About the Lindau Nobel Laureate Meetings

The Lindau Nobel Laureate Meetings began in 1951 after two physicians, Franz Karl Hein and Gustav Parade, brought the idea of a medical conference to Count Lennart Bernadotte. The first meeting brought approximately 400 physicians — mostly from Germany — interested in advancing knowledge in the medical field. Now, participants come from over 80 countries to discuss a range of research expertise.