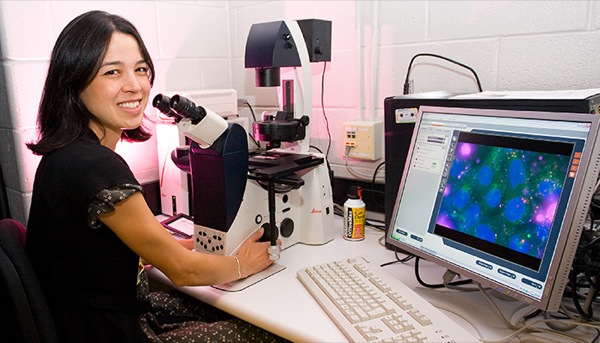 8:20 a.m., Feb. 25, 2013–Millicent Sullivan, assistant professor in the University of Delaware’s Department of Chemical and Biomolecular Engineering, has been selected to present at the 2013 Georgia Tech Frontiers in Bioengineering Workshop, Feb. 25-26.

Held at the Georgia Tech Parker H. Petit Institute for Bioengineering and Bioscience in Atlanta, the workshop brings together the world’s leading bioengineers to discuss cutting-edge research and identify critical long-term challenges in bioimaging, biomaterials and cellular and molecular bioengineering.

Sullivan was one of 23 young investigators selected nationwide.

Advancing tissue and cell selective drug release, she says, could significantly improve the prognosis of individuals with debilitating conditions including hypertension, chronic wounds and many types of cancer.

By mimicking natural cellular processes with polymer- and peptide-based biomaterials, Sullivan has been able to successfully develop new methods for packaging DNA therapeutics as well as small-molecule chemotherapies.

“A drug’s efficacy can be greatly improved by narrowing what it targets. If packaging materials can be designed such that a drug is released only within damaged or infected cells, the healing efficacy of the drug will increase while side effects will decrease,” Sullivan explained.

Sullivan joined the UD faculty in 2006. She earned the National Science Foundation Career Award to study how cells interact with gene delivery systems and how chemical changes within the packaging materials affect gene transfer in 2008. Sullivan was an invited attendee at the German-American Frontiers of Engineering Symposium of the National Academy of Engineering (NAE) in 2010.

A frequent speaker at invited conferences, lectures and seminars, Sullivan was awarded the College of Engineering’s Outstanding Junior Faculty Member award in 2011.

Sullivan earned her undergraduate degree from Princeton University and her doctorate from Carnegie Mellon University, both in chemical engineering. Prior to joining UD, she conducted post-doctoral research in extracellular matrix biology at the Benaroya Research Institute.