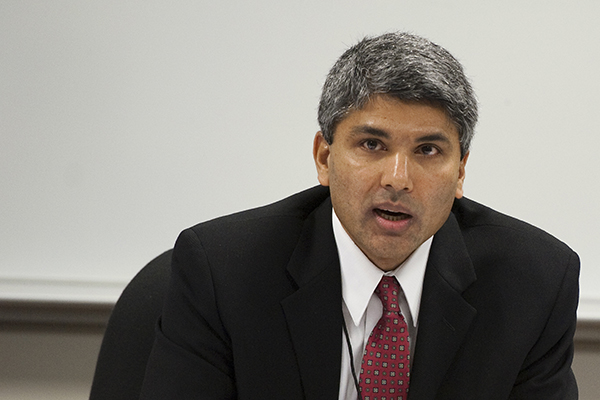 The event was sponsored by the University of Delaware Energy Institute (UDEI) and organized by the Center for Fuel Cell Research (CFCR). Presentations covered current research aimed at improving the performance and durability of fuel cells, reducing their costs, and exploring new methods to produce hydrogen renewably from sunlight.

According to Ajay Prasad, professor of mechanical engineering and CFCR founder-director, fuel cells offer the potential to reduce the nation’s dependence on fossil fuels, reduce greenhouse gas emissions and improve urban air quality. Hydrogen-powered fuel cells, for example, are highly efficient energy conversion devices that produce zero emissions at the point of use.

For clean energy technologies to be successful, Prasad said it is important for industry and academic experts to work collectively. CFCR’s role is to facilitate collaboration between various parties working in this area with events such as symposiums and workshops.

“Delaware is the epicenter of the fuel cell industry with W.L. Gore, DuPont and now Bloom Energy in our midst,” Prasad said. Air Liquide, another neighbor of UD, he continued, is one of the world’s largest producers of industrial gases, including hydrogen.

UD faculty are actively engaged in efforts to improve fuel cell performance and to help commercialize them. It is work that Prasad believes aligns with UD’s “Initiative for the Planet,” a major theme in the University’s Path to Prominence strategic plan.

“It makes sense that UD is actively engaged in fuel cell and hydrogen infrastructure research,” he said.

A short course held in conjunction with the symposium provided participants a firm understanding of fuel cell science and technology, and introduced the history and operating principles of fuel cells and various loss mechanisms that lead to reduced performance.

Discussions detailed the production and storage of hydrogen, followed by state-of-the-art examples of fuel cells for automotive, stationary power and portable power applications. The short course included a tour of UD fuel cell labs and a demonstration of the UD fuel cell bus.