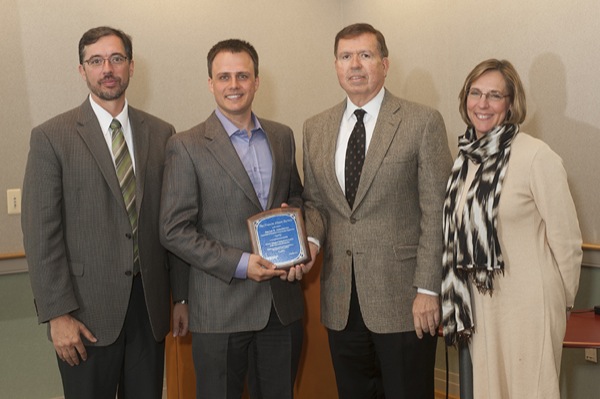 Named in honor of a distinguished University professor, the award is given annually to promising and accomplished young faculty. Recipients are chosen by fellow faculty members who have received the Francis Alison Award, the University’s highest faculty honor.

According to Donald L. Sparks, S. Hallock du Pont Chair in Plant and Soil Sciences and chair of the Francis Alison Society, Antoniewicz was selected for his distinguished accomplishments in research and promise as a leading scholar and teacher.

“Prof. Antoniewicz joins a group of previous Young Scholar recipients who are making major contributions in their areas of expertise,” Sparks said.

“I am humbled to receive this award. There are many outstanding and innovative young faculty at UD, and it is gratifying to be selected for this honor by the Francis Alison Society”, said Antoniewicz, who is also affiliated with the Center for Bioinformatics and Computational Biology.

Antoniewicz has gained international recognition as an emerging leader in the area of metabolic engineering and biological systems, research that underlies much of biomolecular engineering.

A faculty member since 2007, he received a National Science Foundation Career Award in 2011. He was named a DuPont Young Professor and earned the James E. Baily Young Investigator Award, which annually recognizes the best publication in the metabolic engineering field, in 2008. Earlier this year, he was named a UD 2012 Outstanding Junior Faculty member in the College of Engineering.

Antoniewicz is currently working on key engineering science necessary for biotechnology to achieve the promises of clean energy and mitigation or elimination of disease. In particular, his research combines advanced experimental techniques with metabolic flux modeling to more deeply understand fundamental metabolic pathways. Broadly, this work may lead to new tools and techniques for quantitative examination of genome-scale models of organisms with important applications in biotechnology and medicine.

On campus, Antoniewicz is a recognized educator and mentor. He was instrumental in improving and expanding the elective offerings in the Department of Chemical and Biomolecular Engineering’s biochemical engineering minor, including developing a core undergraduate laboratory class that leverages UD’s world-class research laboratories to integrate undergraduate education with undergraduate and graduate research.

Antoniewicz earned his bachelor’s and master’s degrees in chemical engineering, with a minor in biotechnology, from Delft University of Technology in The Netherlands. He earned his doctorate in chemical engineering from Massachusetts Institute of Technology, with a minor in human physiology. Antoniewicz joined UD in 2007. He previously conducted postdoctoral research with DuPont in Central Research and Development.

The Mangone Young Scholars Award is named in honor of the late Gerard J. Mangone, who joined the UD faculty in 1972 and created the UD Center for the Study of Marine Policy, renamed in his honor in 2003.

Dr. Mangone, University Research Professor in the College of Earth, Ocean, and Environment, received the Francis Alison Award in 1983. In 2010, he received an honorary degree from UD. He died on July 27, 2011.