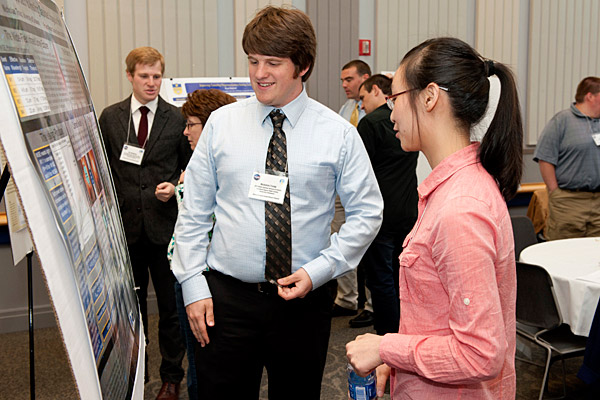 2:01 p.m., May 23, 2012–The Delaware Space Grant Consortium, of which the University of Delaware is an affiliate, held its annual symposium April 27 on the UD campus to highlight research work that has occurred as a result of funding support from the NASA Space Grant program.

The keynote address was given by Phil Spampinato, director of government business development at ILC Dover in Frederica, Del.

Spampinato has been at ILC Dover since 1984, when he joined the company as part of the spacesuit team. His responsibilities have included design, development, testing and production of the NASA space suit assembly, part of the Extravehicular Mobility Unit (EMU), and design and development of advanced space suit concepts and hardware.

He was later promoted to product manager in space products. One of ILC’s most visible unmanned space products were the impact bags that successfully landed the Pathfinder, Spirit and Opportunity Rovers on Mars.

NASA’s Space Grant program was started by congressional mandate in 1989 in order to ensure that NASA would continue to have access to a well-trained workforce of U.S. citizens in the areas of interest to the agency’s missions. These areas include science, technology, engineering, mathematics — the so-called STEM fields — and geography.

Each year since 1989, Congress has appropriated up to $40 million per year to NASA to administer the national Space Grant program. Within each state, a consortium of colleges, universities and industrial partners collaborate to award fellowships, scholarships and internships to deserving graduate and undergraduate students in the STEM areas. Space Grant funds are also used for in-service training of pre-college STEM teachers.

U.S. citizens at any of these institutions are eligible to apply once every year for three types of funding:  graduate fellowships (including a stipend of $26,000 per year), undergraduate tuition scholarships (up to $3,000 per year), and summer research internships (up to $3,500 on campus, and up to $6,000 at a NASA Center).

At the annual research symposium, graduate fellows and undergraduate research interns present results, either orally or by poster, of the work they have performed under Space Grant auspices during the past year.

On April 27, in the presence of 55 attendees, oral reports were presented by Jennifer F. Biddle, assistant professor in the School of Marine Science and Policy at UD’s Hugh R. Sharp Campus in Lewes, and also by graduate fellows from UD (representing the departments of Mechanical Engineering, Geography, Physics and Astronomy, Chemical and Biomolecular Engineering) and from Delaware State University (representing the Department of Chemistry).

Announcements of opportunities for fellowships, scholarships, and internships are made in January-April each year.

Information about Space Grant opportunities is available at the Delaware Space Grant Consortium website, and hard copies of the information are also circulated throughout the state via an affiliate representative on each campus.

On the UD campus, information can be obtained from faculty members in the colleges of Engineering (Bingqing Wei, mechanical engineering); Earth, Ocean, and Environment (Xiao-Hai Yan); and Arts and Sciences (Tracy DeLiberty, geography; William H. Matthaeus and Harry L. Shipman, physics and astronomy).

For further information about NASA’s Space Grant program in the state of Delaware, contact Cathy Cathell in the consortium office, 212 Sharp Laboratory on the UD campus in Newark, telephone 302-831-1094.

The Delaware Space Grant Consortium also has a Facebook page.