Tyler Josephson, a UD doctoral student in chemical and biomolecular engineering, has been awarded the 2012 Laird Fellowship. 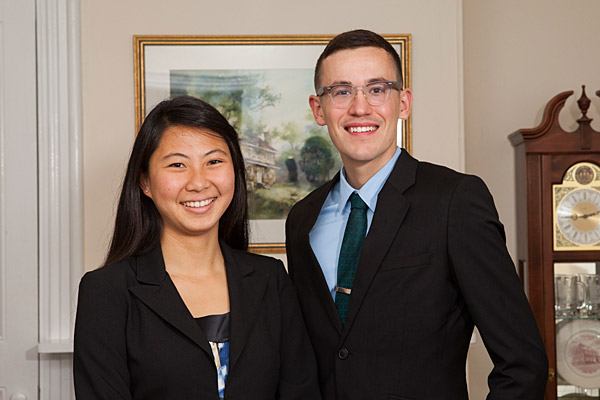 3:34 p.m., May 9, 2012–Robert Pagels and Gealina Dun have been selected as the recipients of the Alexander J. Taylor Sr. and Emalea Pusey Warner awards, respectively, as the outstanding man and woman of the University of Delaware’s 2012 graduating class.

The awards are given annually by the UD Alumni Association to recognize the senior man and woman who most exemplify leadership, academic success and community service.

A dean’s list student every semester, Pagels has maintained a 4.0 GPA and was one of a select group of students in the Class of 2012 to be awarded a Eugene du Pont Memorial Distinguished Scholarship.

Pagels has also shown leadership out of the classroom in addition to excelling academically. He served as sophomore representative, treasurer and is the current president of the local American Institute of Chemical Engineers (AIChE) student chapter and is the Chemical Engineering Student Representative with the Engineering Educational Activities Committee. In addition, he served as a consultant to the Chemical Engineering Advisory Board. Through these positions he has often represented the student population of the department when important donors, alumni, visiting professors and prospective professors visit.

In the summer after his freshmen year, wanting to do something meaningful and different, Pagels found and introduced himself online to an Indian woman who had 30 orphan children between 6 and 12 years of age living in her home. With the help of professors and friends, he organized a trip to Tiruvannamalai, India, and spent a month helping in the orphanage. He organized paperwork, filled out necessary government forms, put together a library and worked with the children on their English when they returned from school. After his time in India, Pagels continued community service work on a more local level as vice president of Alpha Lambda Delta, an honors society with a focus on community service.

Katharine Kerrane, senior associate director in the Honors Program, said, “With Robby’s overall brilliance, scientific expertise and curiosity about the world, he clearly will have an extremely successful career. The fact that he wants to put his talents to use in developing practical solutions to medical problems and wants to teach the next generation of scientists is in the best tradition of Taylor Award winners — successful alumni who are dedicated to giving back to society.”

Dun, who is from Hockessin, Del., will graduate with an honor’s bachelor of science degree in neuroscience with minors in Spanish and biomedical engineering and will attend medical school in the fall.

Throughout her time at the University, Dun has demonstrated academic excellence, leadership and a dedication to serving her community. A dean’s list student every semester, Dun maintained a GPA above 3.8 and also was awarded a Eugene du Pont Memorial Distinguished Scholarship. She earned the General Honors Award, which recognizes Honors coursework completed in the first two years.

Dun is a Writing Fellow, Student Admissions Officer and a Blue Hen Ambassador. She also served as a New Student Orientation assistant for two summers and a Russell Fellow for which she was honored with the Woody Sprague Outstanding Russell Fellow Award in May 2011.

Dun has volunteered with A.I. duPont Hospital for Children and is currently working as an intern with Nemours Health and Prevention Services.

Kristin Bennighoff, associate director in the Honors Program, said, “Gealina embodies the spirit of Mrs. Warner as a female leader within our educational community. Her dedication is unmatched by any other student I have known.”

Alexander J. Taylor Sr. (1875-1940) entered Delaware College in 1889 and graduated in 1893 as class valedictorian, with a baccalaureate degree in civil engineering. Mr. Taylor was elected to the Board of Trustees in 1927, reelected in 1932 and again in 1938. He served on the Grounds and Buildings Committee and Executive Committee and was chairman of the Finance Committee.

Emalea Pusey Warner (1853-1948) is best remembered on the University of Delaware campus as a champion of education. In 1911, she became chairperson of the State Federation of Women’s Clubs’ Committee on Education and worked diligently toward the specific goal of establishing a state-supported women’s college. In 1914, she was appointed chairperson of the Advisory Council of the Women’s College and later became the first woman member of the Delaware College Board of Trustees. Both Warner Hall on the UD campus and Warner Elementary School in Wilmington are named in her honor.

The Warner Award was first given in 1950, while the Taylor award debuted in 1968. Recipients are recognized with a $2,500 scholarship, are honored at a luncheon and lead the alumni delegates procession at Commencement.

BiomedicalTyler Josephson, a UD doctoral student in chemical and biomolecular engineering, has been awarded the 2012 Laird Fellowship.