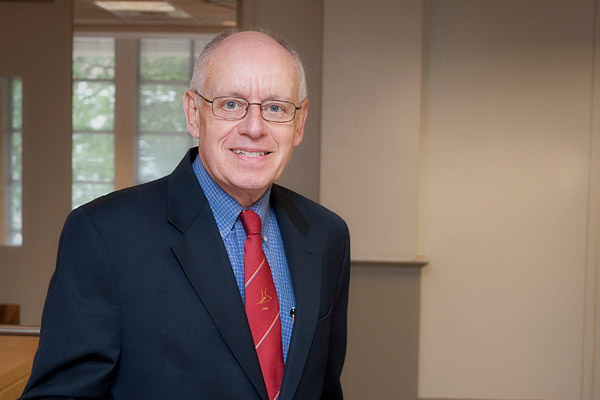 3:23 p.m., May 21, 2012–Regarded as one of the University of Delaware’s most decorated and renowned faculty members, Stanley Sandler has made his presence known in academic, scientific and professional communities worldwide.

His career, which spans more than 45 years, has included by numerous honors and awards, visiting professorships at universities around the world, almost 400 research papers, and 10 books both written and edited.

This June, Sandler, the H.B. du Pont Chair of Chemical and Biomolecular Engineering, will receive the CACHE (Computer Aids in Chemical Engineering) award for excellence in chemical engineering computing for his groundbreaking use of technology in the classroom. He will receive the award, which consists of a plaque and a $1,000 stipend, at the 2012 the American Society of Engineering Education (ASEE) meeting in San Antonio, Texas.

Sandler began using technology as an integral component of his thermodynamics curriculum before his first textbook, Chemical and Engineering Thermodynamics, was published in 1977. Blending technology with education, the textbook — now in the fourth edition — includes complementary disks with programs and computational software that enables students to perform calculations with simulated thermodynamic models.

The fourth edition has its own website to host an array of components that support student assignments and calculations. This includes additional problem sets, solutions to thermodynamic problems and data, and modern computational programs for realistic homework exercises. The programs use a variety of software including MATHCAD, MATLAB, and Visual Basic for realistic engineering calculations.

In addition to educating with technology, Sandler has involved his students in the creation of his computational aids. During the 1980s, Sandler and his students designed a sequence of thermodynamic lessons using the now outdated PLATO (programmed logic of automated teaching operations) systems. These computer-aided lessons were published and distributed through NOVANET, an online courseware system.

Shaing-Tai Lin, a former student, calls Sandler a dedicated researcher and educator who routinely took time out to ensure his students’ success.

“Every week, Dr. Sandler would take the time to personally discuss my research,” says Lin, now a professor of chemical engineering at National Taiwan University.

“He provided me opportunities to gain teaching experience, supervise undergraduate research and conduct research abroad. I can confidently say that my interactions with Dr. Sandler at UD were the most valuable experiences in establishing my current career.”

Sandler joined UD in 1967. He was inducted as a fellow of the American Institute of Chemical Engineers (AIChE) in 1993 and the British Institute of Chemical Engineers (IChemE) in 2004. He was elected a member of the prestigious U. S. National Academy of Engineering (NAE) in 1996 and served as the editor-in-chief of the AIChE Journal from 2000-11, one of the most important chemical engineering journals in the world.

His numerous career honors include the Professional Progress, Warren K. Lewis, Founders and Professional Progress Awards from the AIChE, the E.V. Murphree Award from the American Chemical Society (ACS), the 3M Chemical Engineering Lectureship Award from the ASEE and the Properties and Phase Equilibrium for Process and Product Design (PPEPPD) Eminence Award, of which he was the inaugural recipient. He is also a previous recipient of UD’s Francis P. Alison Award, the University’s highest faculty honor.