Good to be green 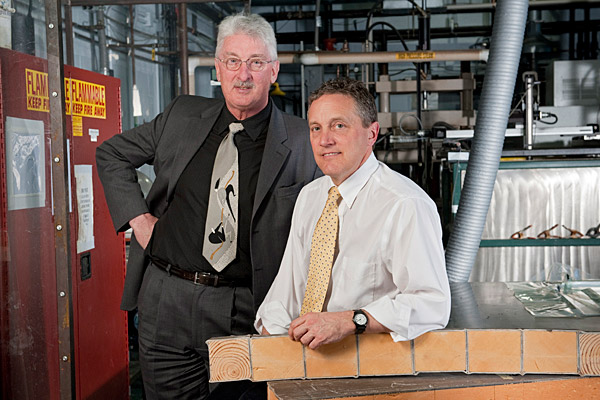 1:37 p.m., March 22, 2012–In today’s day and age, advances in green chemistry are leading the way for remarkable sustainability efforts. Evidenced in high-performance composites and resins made from soybean and newspapers, as well as computer circuit boards made from chicken feathers, in the hands of researchers, ordinary materials lend themselves to the creation of renewable resources.

Among those leading the charge at the University of Delaware is Richard Wool, professor of chemical and biomolecular engineering and a known authority in green chemistry.

Wool will share his expertise as the lead keynote speaker at the 16th annual Green Chemistry and Engineering Conference in Washington, D.C., June 18-20. Held since 1996, the conference annually attracts chemists, engineers, researchers, policy analysts, venture capitalists, students and others interested in global sustainability.

In his address, entitled “Green Materials and Global Sustainability,” Wool will discuss sustainability, jobs and opportunities through green chemistry. In particular, he will share his current work toward “greening Africa” through the construction of energy-efficient township homes made of renewable resources in South Africa.

According to Wool, positive net energy (PNE) houses generate more energy than they require, allowing the excess energy produced from the monolithic roofs — developed at UD by Wool in collaboration with Harry (Tripp) Shenton, chair of the Department of Civil and Environmental Engineering — to contribute to the community’s energy grid. In turn, the energy adds to the clean energy economy, benefiting millions of Africans living in environmentally improved areas.

Similarly, Wool is also working to develop hurricane resistant housing in Haiti, using the monolithic “sandwich structure.” Composed of biomaterials that respond favorably to high winds, Wool’s roofs are single units that withstand inclement weather remarkably well. In both locations, homes will be constructed at a low cost from biobased, energy efficient materials.

“Green chemistry enables the generation of new chemicals of high value from renewable resources such as ligno-cellulosics (plants), which can be used as biofuels, and less toxic replacements for commonly used materials,” Wool said.

He will also touch on emerging developments in biobased foams, low VOC materials, and eco-leather, which could all significantly impact the U.S. economy.