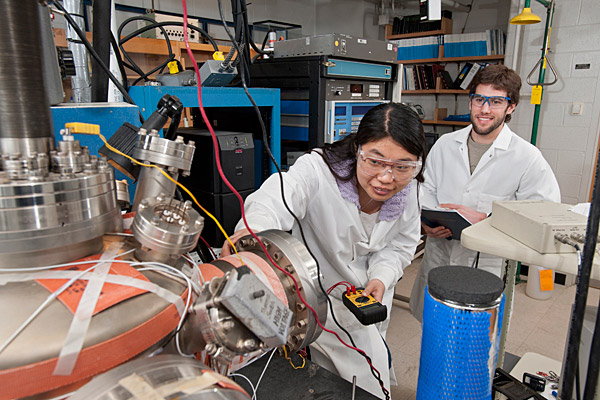 9:50 a.m., March 12, 2012–Every other Wednesday, University of Delaware graduate student Michael Salciccioli meets with faculty, students and postdoctoral researchers from UD along with colleagues from the University of Pennsylvania who are conducting research in UD’s Catalysis Center for Energy Innovation (CCEI), an Energy Frontier Research Center funded by the Department of Energy.

During these meetings, students and postdocs present their research, discuss challenges in their work and collaborate with their peers as well as the faculty. These bi-weekly meetings are designed to nurture ingenuity and multidisciplinary teamwork at a highly synergistic level.

Salciccioli is a fifth year doctoral student studying chemical engineering. His research focuses on computational modeling of metal catalysts useful to the production of biofuels and biochemicals.

“Catalytic testing is expensive. By mathematically weeding out catalysts that are less attractive, we can maximize resources to investigate options with commercial potential,” Salciccioli said.

According to Salciccioli, one major problem in biomass utilization is the difficulty in efficiently turning biomatter (corn husks and stalks, for example) into useful chemicals and fuels. A good catalyst speeds up a reaction, he said, enabling quicker production of desired chemicals. It also increases reaction selectivity, which means less waste, and reduces the need for energy intensive (and expensive) separation of undesired chemicals.

“With respect to biofuels,” he continued, “this is incredibly important because biomass molecules are complex and require targeted removal of oxygen atoms to increase their energy density.”

Mathematical modeling, however, can only take the research so far. To learn more about how catalysts behave under reaction conditions, Salciccioli turned to fellow doctoral student Weiting Yu, who uses experimental techniques and spectroscopy to visualize and characterize catalytic reactions.

Yu’s experiments helped Salciccioli validate the reactions he was studying computationally, while Salciccioli’s research helped Yu predict the activity of catalysts critical to her work.

“Whether my results agree with Mike’s results is important. He may be able to fill holes in my work and vice versa,” said Yu.

The work resulted in a paper, published in the Journal of the American Chemical Society. Ultimately, it may also enable a new class of catalysts in biofuel production.

Salciccioli will defend his thesis this spring, before graduating in May. He has accepted a position with ExxonMobil Chemical in Houston, Texas, where he will continue work in catalysis and reaction engineering.

“By working together, we enhanced the quality of work each of us was able to achieve, as well as the depth of knowledge coming out of CCEI,” Salciccioli reflected. “More than anything else, working at CCEI has taught me that open communication and information sharing is integral to the acceleration of scientific progress. The center offers an unprecedented level of interaction and enhances graduate education.”

“The Catalysis Center plays an important role in developing new technologies for sustainable energy applications through the conversion of biomass derivatives,” remarked Vlachos, CCEI director and Elizabeth Inez Kelley Professor of Chemical and Biomolecular Engineering. “We are working with colleagues both at UD and our partner institutions to make significant advances in catalysis, materials synthesis, in situ characterization and multiscale modeling. Additionally, we are training next generation engineers like Mike and Weiting to be leaders in their field.”

Other innovations enabled through CCEI include:

Supported by the U.S. Department of Energy, Office of Basic Energy Sciences, through its Energy Frontier Research Centers (EFRC) program since 2009, CCEI and its researchers have been developing innovative catalytic technologies to efficiently convert biomass, such as trees and grasses, into chemicals and fuels.