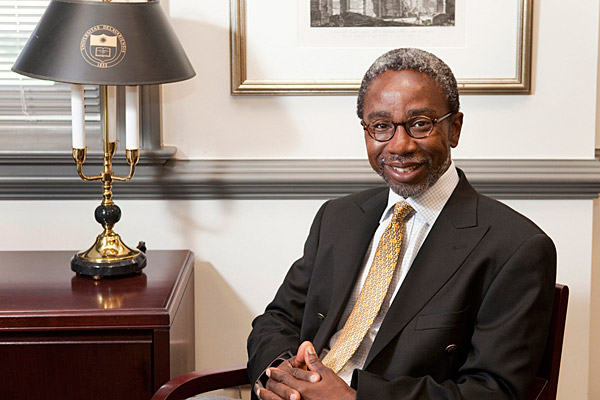 8:22 a.m., Feb. 10, 2012–A University of Delaware engineering professor noted for his contributions to advances in process systems, process engineering practice and systems engineering education has been elected to the prestigious National Academy of Engineering (NAE).

Babatunde A. Ogunnaike, William L. Friend Chair of Chemical Engineering and interim dean of the College of Engineering, is among the NAE’s 66 new members and 10 foreign associates announced in a press release Feb 9.

Academy membership is among the highest professional distinctions accorded to an engineer, placing Ogunnaike among an elite group of individuals who have made outstanding contributions to engineering research, practice or education. It recognizes scientists who have emerged as pioneers in new and developing fields of technology, made major advancements in traditional fields of engineering or developed innovative approaches to engineering education.

“Tunde’s career has had great impact on industrial practice, as well as on education and research. I am pleased to see him recognized for his scientific contributions and his commitment to educating tomorrow’s leaders,” remarked Mark A. Barteau, senior vice provost for research and strategic initiatives at UD and fellow NAE member.

In particular Barteau noted Ogunnaike’s model-based process control advances, developed during his 13-year research career at DuPont, which today affect a number of commercial processes. Equally, his textbooks have been used to educate and train thousands of engineers in systems control and instrumentation at more than 29 universities.

Ogunnaike is known among his colleagues and students as an outstanding scholar and mentor. He spent many years teaching at UD while with DuPont, before joining the faculty. T.W. Fraser Russell, Allan P. Colburn Professor Emeritus of Chemical Engineering and NAE member, said Ogunnaike is a “valued UD faculty member and leader” known for his capability, both in the classroom and with individual students.

“It is rare to find an individual that has that unique combination of effective industrial experience and academic expertise,” Russell explained.

“I am honored and humbled,” Ogunnaike said of the appointment.

He has won a number of awards, including the Donald P. Eckman Education Award from ISA, an international organization involved in instrumentation, systems and automation, in 2007. In 2008, he received the American Automatic Control Council’s Control Engineering Practice Award. He also has received the College of Engineering’s Excellence in Teaching Award.

The Department of Chemical and Biomolecular Engineering plans to honor Ogunnaike with a reception Tuesday, Feb. 14.