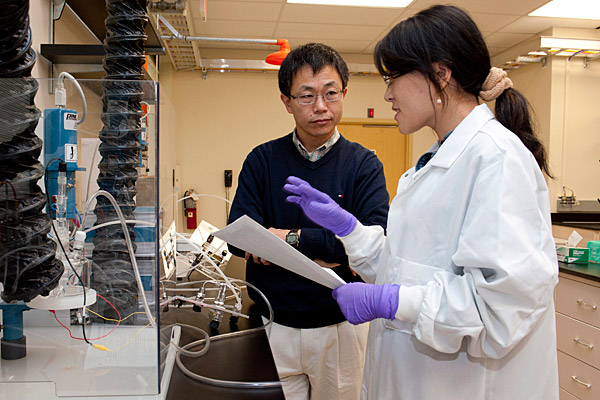 12:43 p.m., Feb. 9, 2012–Yushan Yan, who has been named the University of Delaware’s Distinguished Professor of Engineering, will deliver his inaugural lecture at 4 p.m., Wednesday, March 7, in 115 Purnell Hall.

Yan’s lecture is entitled “Clean Energy: Flash without Flame.” A reception will follow in the lobby of P.S. du Pont Hall.

Yan joined UD in July, 2011. A world-renowned researcher, he is known for his work using nanomaterials to solve problems in energy engineering, environmental sustainability and electronics. Yan’s current work involves development of new fuel cell catalysts and membranes to reduce the cost and improve the durability of fuel cells.

He previously served as Presidential Chair of the Department of Chemical Engineering at the University of California, Riverside, where he was one of five inaugural UCR University Scholars.

Yan earned his bachelor’s degree in chemical physics from the University of Science and Technology of China in 1988. He received his master’s and doctoral degrees in chemical engineering from the California Institute of Technology in 1995 and 1997, respectively. He also studied at the Dalian Institute of Chemical Physics of the Chinese Academy of Sciences before beginning his doctoral work in 1992.

The College of Engineering Distinguished Professorship originated in the 1960s as the Hawthorne Professorship, named for Howard S. Hawthorne and funded through a DuPont engineering department employee voluntary endowment. The endowment has received additional gifts over the years and expanded into the current professorship.