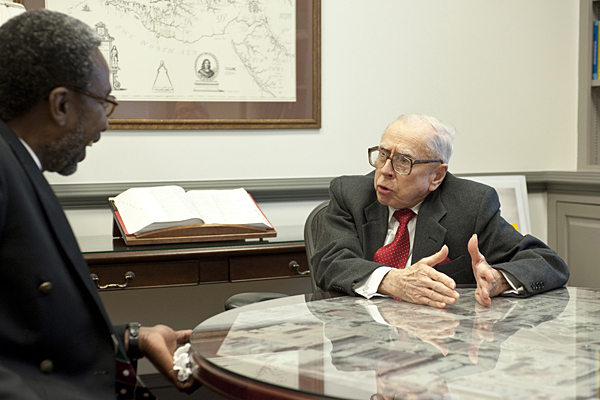 3:45 p.m., Dec. 21, 2011–When Milton Harper was a chemical engineering graduate student at the University of Delaware in the 1940s, he was one of only about a half dozen students in the program—all males. The department was housed in a wing of Brown Laboratory, where there were no computers and the most modern piece of equipment was a distillation column.

Now 90 years old, Harper returned to UD on Monday, Dec. 19, to see the latest campus updates—which turned out to be substantial, as the loyal alum had not been back to Newark since Colburn Laboratory was dedicated following renovations in 1996.

In 1946, Harper was a married 25-year-old grad student who had already spent four years working and serving in the Navy. He commuted to UD by bus from the Wilmington suburbs, so his campus life was limited to the classroom and the laboratory. Harper doesn’t have memories of dorm life, Saturday afternoon football games, or late-night study sessions in the library.

But he does have vivid UD memories, most of them focused on his adviser, Prof. Allan P. Colburn. “I respected him so much,” Harper said. “As far as I’m concerned, he was the reason UD has such a good chemical engineering program. He started it, and he pushed it forward.”

Harper had never met Colburn when he applied for admission to UD, but he had read many of his papers and was eager for the chance to do research with the legendary professor.

Despite Colburn’s lofty reputation, Harper found him to be caring and supportive. “He was a terrific man. He didn’t think he was way up there, and you were way down there. He was a good listener—if you could get him to hold still long enough to listen.”

Harper recalls that Colburn would start a conversation, run down the hall for a few minutes, and then return to his office to pick up where he had left off. “I guess he had a lot of things going on in his head,” Harper said. “He was always working on a dozen different problems at once.”

Colburn, along with the other faculty members who joined the program after World War II—Jack Gerster, Olaf Bergelin, Robert Pigford and Kurt Wohl—have all become important figures in chemical engineering history. But, aside from Colburn, Harper’s most intense memories are of Wohl, who taught thermodynamics and had a reputation for terrorizing students.

“He was a wild man,” Harper said, “and everyone feared his class—the subject was difficult, and he was hard to understand because of his German accent.”

At one point during the recent visit, Abraham M. (Bramie) Lenhoff, Allan P. Colburn Professor, handed Harper a copy of his thesis from 1948. Harper smiled wistfully as he looked at the blue-leather-bound document, its pages brittle and yellowed.

“This is pretty pathetic compared to today’s science,” he said. “I’ve read about what you all do today, and I don’t understand it.”

But Harper himself is far from pathetic. He had a successful career in industry after completing his master’s degree. “I originally planned to go on for a Ph.D., but I got tired of school,” he said.

Following graduation, he joined Rohm and Haas as a process engineer and later accepted a position with American Cyanamid.  He went on to become president of HBH Technologies and then of National Casein, Inc. He retired six years ago at the age of 84.

Babatunde Ogunnaike, interim dean of the College of Engineering, spent half an hour talking with Harper during his daylong visit.

“As an African, I value the stories of people like Mr. Harper who were eyewitnesses to history,” said Ogunnaike, who is also the William L. Friend Chair of Chemical Engineering. “We were raised on stories told by elders who knew the history of the clan, and we always wanted to get these stories down before the people who had all this knowledge and all these memories passed on.”

“I found Mr. Harper engaging,” he added, “and I enjoyed his reminiscences about his time with Allan Colburn.”

A member of the Delaware Diamonds Society, Harper said he feels very connected to UD. Although he doesn’t attend events or visit campus often, he stays engaged with the institution that linked him to Colburn.

“UD talks to me,” he said. “I get all kinds of letters and publications from Delaware, and I read them all.”

Most of Harper’s gifts to the University are designated for the Robert L. Pigford Scholarship.

“I didn’t know Prof. Pigford very well because he joined the faculty near the end of my time here,” Harper said. “But he was also a legend in chemical engineering. Colburn hired him, and I believe the saying about smart people hiring other smart people.”

Harper did have one moment of “concern” during his visit.  He noticed that Colburn’s signature was missing from the copy of his thesis that Lenhoff shared with him.

“After all this time, I’m discovering that I really didn’t earn a degree here,” he joked.

“I’m pretty sure this is just a copy and the original was signed,” Lenhoff assured him.

Allan Colburn was born in Madison, Wis., on June 8, 1904. He graduated with high honors from the University of Wisconsin with a degree in chemical engineering in 1926. He received his master’s degree in 1927 and his Ph.D. in 1929.

Colburn joined the faculty at the University of Delaware in 1938. He was appointed assistant to the president of the University in 1947 and as acting president in 1950. He then served as provost and coordinator of scientific research until his death in 1955.

In 2008, Colburn was designated one of “50 Chemical Engineers of the Foundation Age.” The list was compiled by the American Institute of Chemical Engineers in conjunction with its centennial celebration. Colburn was recognized for his achievements as a pioneer of heat transfer and energy flow, including the Chilton-Colburn analogy.

Also on the list of 50 were Prof. Robert Pigford and James Westwater, a classmate of Harper’s who in 1948 became the first student to earn a doctoral degree in chemical engineering from UD.