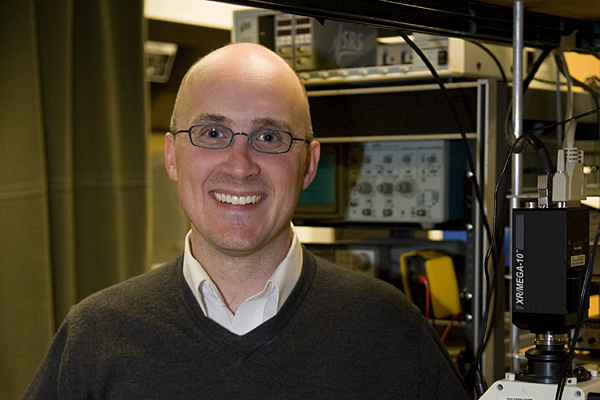 11:10 a.m., Dec. 21, 2011–The University of Delaware’s Eric M. Furst authored a commentary in the Proceedings of the National Academy of Sciences (PNAS) advance online edition Dec. 19.

The annotation, entitled “Directing Colloidal Assembly at Fluid Interfaces,” reflects on work done by Kathleen Stebe, the Richer and Elizabeth Goodwin Professor of Engineering and Applied Science at the University of Pennsylvania. Specifically, Furst comments on the use of directing fields to control the assembly of colloidal particles as a promising route to new nano- and microstructured functional materials.

“An impressive set of design tools is emerging, including programmable interactions and directing fields, that make it clear that engineering directed colloidal assembly by using interfaces has strong potential for the bottom-up fabrication of novel structured materials,” said Furst, associate professor in the Department of Chemical Engineering and director of the Center for Molecular and Engineering Thermodynamics at UD.

“PNAS is a prestigious publication in ranks with journals such as Nature and Science,” he continued. “It was an honor to be asked by the editorial board to highlight the work of colleague Kate Stebe, whose work I greatly admire.”

At UD, Furst’s research focuses on the physics and chemistry of “soft” materials, including colloids, polymers and biomolecular materials. An expert in directed self-assembly and behavior of particles at interfaces, his research group works to create engineering applications for these materials in the areas of energy conversion, nanotechnology, biotechnology, and structured and complex fluids.

“Directed self-assembly is a hot topic in nanomaterials right now,” said Furst. “How you organize matter along length scales, and specifically, how you can direct particles to self-organize or self-assemble to build new structures with new functions are key issues.”

Furst is currently collaborating with Thomas H. Epps, III, assistant professor in chemical engineering at UD, to investigate nanoparticle assembly at interfaces for photovoltaic applications called organic composite photovoltaics (OCPV). He hopes the work will lead to new photovoltaic devices and materials based on this self-organizing principle.

“One goal of the work is to make possible large scale, inexpensive fabrication of photovoltaic materials,” he said.

Previous projects have shown how anisotropic particles — particles that have a complex geometry — can be organized into ordered arrays through use of directing fields. These particles contain unique photonic properties and exhibit a rich structural color due to their organization, making them potentially useful as photonic bangap materials, the light equivalent to an electronic semiconductor. His team has also used similar principles to organize nanoparticles to create ultra-low thermal conductivity films.

Eric M. Furst joined UD in 2001. He is a recipient of the National Science FoundationFaculty Early Career Development Award and the DuPont Young Investigator Award, and he was named a European Union Erasmus Mundus Scholar.