In search of new biofuels 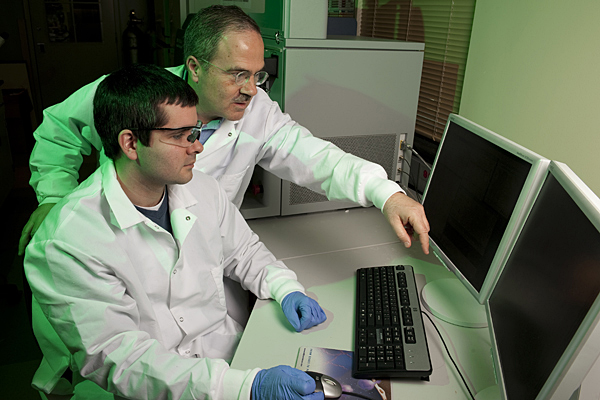 8:36 a.m., Nov. 8, 2011–Biofuels are fuels made from renewable resources, such as agricultural and forest products and byproducts. Unlike their non-renewable fossil fuel counterparts, such as oil, their increased usage has the potential to reduce pollution and U.S. dependence on foreign resources.

Their production, however, is problematic. Biofuels must be produced quickly and at high concentrations in order to make them economically feasible. Unfortunately, the process can be toxic to cells necessary in their manufacture.

Eleftherios (Terry) Papoutsakis, Eugene du Pont Chair of Chemical Engineering at the University of Delaware, is working to create hardy organisms for producing biofuels and chemicals from renewable sources – microorganisms that are more resistant to toxic chemicals and engineered to withstand the stress response that can inhibit cell growth and cause cell death.

The three-year project is funded through a $2.2 million grant from the U.S. Department of Energy(DOE). The research is considered important to the DOE’s mission on energy and the environment, particularly in developing a fundamental way to understand and model complex programs of organisms and biological systems.

Stress response and tolerance of microorganisms to chemicals is complex, involving several parameters such as pH, temperature, osmotic pressure and the presence of other molecules. For applications in biofuel production, it is important to understand the cellular response to various chemicals and other bioprocess conditions.

“Our main goal is to improve the organism used to derive economically feasible biofuels by focusing on the genomic technology,” said Papoutsakis, principal investigator on the grant.

Previous biofuel production research has mainly focused on ethanol, but in the last three to four years, butanols have attracted considerable interest as biofuels because they exhibit superior chemical properties in terms of energy content, volatility and corrosiveness.

“There is growing evidence that the stress response is related to tolerance,” Papoutsakis continued. “Thus, a detailed understanding at the genomic level and predictive modeling of the cellular programs and pathways engaged in metabolic stress responses are likely to lead to creative solutions for engineering biofuels with superior tolerance.”

Papoutsakis has coordinated a strategic group of researchers with expertise in genetics and genomics; genomic tools and analysis; bioinformatics; biological model building and genome scale modeling to undertake this study.

In addition to Papoutsakis, the research team includes five UD faculty members and one collaborator at Pennsylvania State University. They are:

The team will use an experimental systems-biology approach to support the development of integrated, predictive models of the metabolic and regulatory networks underlying the metabolite stress response in solventogenic clostridia.

Clostridia are anaerobic bacteria that are critical to the fermentation process in biofuel production. The work involves using high-throughput genomic technologies to explore the stress-response of Clostridium acetobutylicum to butanol and butyrate at the molecular level.

The data collected will be used to develop two models for the metabolite stress response. It will also be used to create a second generation Genome-Scale Model (GSM), a complex model of the whole metabolism of the cell, mapping all of the literature data that exists, as well as the new data the team plans to generate, to the genetic information of the GSM in order to make sense out of it.

“Coupling bioinformatics and computational modeling with advanced experimental systems biology methods, this project will establish a new research infrastructure at UD that can be leveraged for other multi-disciplinary research collaborations that require such global-scale, systematic and integrative analyses for understanding of biological systems,” explained Wu, who is a co-principal investigator on the grant.

According to Papoutsakis, this is the first time the group has worked together in this way.

“I don’t think there has been a project before that has had this level of integration of faculty, capabilities and technology to look at a complex problem like the stress response using a systems biology approach,” Papoutsakis said.

“It is a terrific scientific opportunity with fantastic technological application that can also provide tremendous training and education opportunities for undergraduates, graduates and postdocs involved in the project.”

Cathy Wu has proven expertise in building bioinformatics infrastructure. She directs the Protein Information Resource (PIR), which provides integrated databases and tools to support genomics, proteomics and systems biology research. She, along with Hongzhan Huang, will develop the bioinformatics tools and data mining necessary to integrate the effort and the resulting data.

Maciek Antoniewicz specializes in fluxomics, the dynamic changes of molecules in a cell over time. His work will involve studying how the carbon flux enters the cell to support the stress response.

Blake Meyers will perform deep sequencing to help researchers understand the complexity of the transcriptome, while Kelvin Lee works on proteomics to understand the stress response at the protein level.

Costas Maranas will build the complex genomic models to integrate this work at a fundamental level.