UD chemical and biomolecular engineer Thomas H. Epps, III is the recipient of the 2020 Percy L. Julian Distinguished Lecture and Award, given by the National Organization for the Professional Advancement of Black Chemists and Chemical Engineers.

In 2007, the popular science television program NOVA premiered a biopic on Percy Julian titled “Forgotten Genius.” A chemist, Julian is known for pioneering research that led to the development of medications for the treatment of glaucoma and arthritis, as well as human-made versions of natural products, such as cortisol.

University of Delaware chemical engineer Thomas H. Epps, III — who at the time was only a second-year assistant professor — was invited to emcee a question-and-answer session following a special pre-screening of the film at an American Chemical Society event honoring Julian’s career.

ACS noted at the time that Epps was an “exemplar for other young scientists.”

Thirteen years later, Epps is the 2020 recipient of the Percy L. Julian Distinguished Award from the National Organization for the Professional Advancement of Black Chemists and Chemical Engineers (NOBCChE).

Considered the professional organization’s most prestigious honor, the award recognizes achievements in pure and/or applied science. It acknowledges Epps’ dedication to research, as well as his commitment to enhancing the STEM community.

Epps, who now is the Thomas and Kipp Gutshall Professor of Chemical and Biomolecular Engineering and a professor in UD’s Department of Materials Science and Engineering, reflected on the honored saying, “For me this is special because Percy Julian is one of the leading chemists in the field, and he is an African American.”

Julian was the first African American chemist elected to the National Academy of Sciences.

As part of the award, Epps will deliver a pre-recorded technical talk for the NOBCChE 2020 Master Scientist Series on Friday, Sept. 25, followed by a live-online question-and-answer session. An online award recognition ceremony is set for later that day.

His talk will focus on research in UD’s Center for Research in Soft Matter and Polymers (CRiSP) that is leveraging funding from the National Science Foundation’s Growing Convergence Research program to develop innovative methods and technologies to convert biomass waste into high-performance polymers for materials, such as pressure-sensitive adhesives, 3D-printed plastics and drop-in alternatives to petroleum-based precursors.

An exemplary researcher, Epps’ groundbreaking work has had a major impact on the field of chemical engineering, particularly as it relates to polymer science and materials chemistry.

Polymers are larger molecules that are made up of smaller molecules strung together like rail cars on a train to create a long chain. By chemically connecting two or more polymer chains with different properties, engineers can create block polymers that capitalize on the salient features from both materials. In his work, Epps has developed novel methods to precisely control the nanoscale structure and thermomechanical properties in these self-assembling block-copolymer systems. 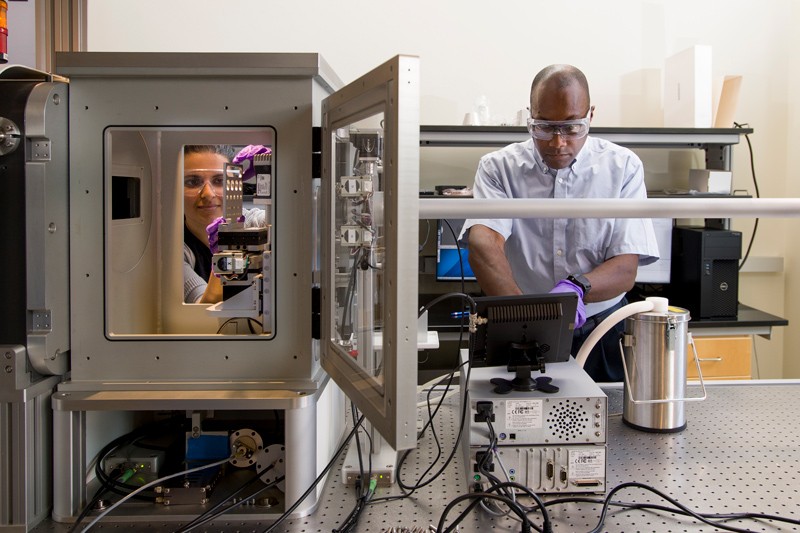 Today, Thomas Epps is an advocate for encouraging our youth to become tomorrow’s future scientists and engineers. He is particularly passionate about “unlocking their excitement in science and doing research and having a good impact on society.”

These studies have advanced efforts toward the introduction of new, processible thermoplastic rubbers, such as polystyrene-based materials found in car tires and rubber bands, as well as low-cost, flexible electrolyte membranes for lithium batteries.

UD has long been a destination for world-class scholars such as Epps, who directs the newly announced $18 million UD Center for Hybrid, Active, and Responsive Materials (UD CHARM), which will drive forward fundamental materials science research with the potential to enable critical innovations in biomedicine, security, sensing and more.

He also is deputy director for the new Center for Plastics Innovation, an Energy Frontier Research Center (EFRC) that aims to upcycle plastic waste into useful products, such as fuels, lubricants and next-generation polymers, among other things.

Through his research group’s work with UD CRiSP, Epps has made gains in designing new materials from renewable and sustainable feedstocks, including waste products, such as lignin, a plant structural component that is a significant byproduct of the paper industry. Lignin-based macromolecules developed by the Epps group have shown significant promise as sustainable and renewable materials as thermoplastic rubbers, additives, flow modifiers and adhesives, and precipitated the launch of a startup company called Lignolix, Inc, whose chief executive officer and co-founder Eric Gottlieb is a UD postdoctoral researcher.

“Building a new company is incredibly difficult, and the support Professor Epps provides continues to be critical to our development. Lignolix would not have the traction it has today without his insights and mentorship,” said Gottlieb.

Early mentors and experiences were key

Epps comes by his teaching roots — and his love of math and science — from his parents. His dad was a chemistry professor. His mom was an accounting professor. 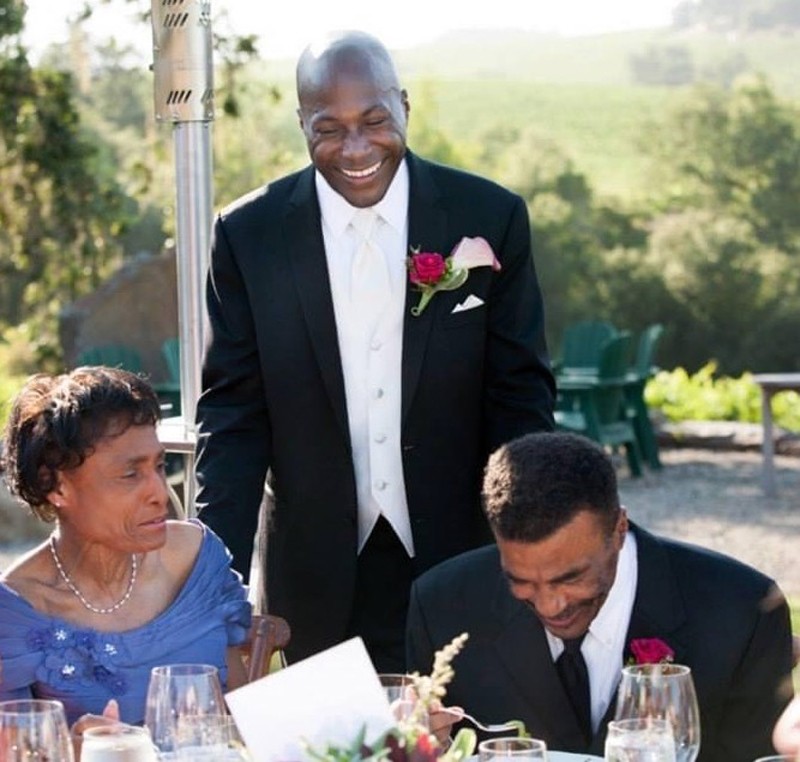 “When I was younger, I had the opportunity to go to work with my dad, sit in on some classes and play with the chemical models,” he said.

What really got him interested in polymers and plastics, though, occurred in 11th grade, when Epps was selected for the Virginia Governor’s School program, where he was placed in an internship at the NASA Langley Research Center in Hampton, Virginia. At NASA Langley, Epps had the unique opportunity to design and work with polymers that were sent to Florida, where they were mounted on the remote manipulator arm of the Space Shuttle Columbia as part of the STS-52 Materials Exposure in Low-Earth Orbit (MELEO) experiment.

“We were looking at polymers that could be used as coatings for solar panels in space,” said Epps. The experiment was led by NASA researcher Philip R. Young and provided important data about how the materials persisted or degraded in the upper atmosphere. The researchers, including Epps, would later simulate these effects in the lab.

“We built our own space atmosphere simulator so that we did not have to send materials up to space every time we wanted to test a new polymer,” said Epps.

“That really piqued my interest in polymers and plastics. Seeing all of the different things you can do with soft materials—from composites on the space shuttle to uses in energy applications—it was exciting.”

That one experience hooked Epps on science, and it led to other experiences, too.

As an undergraduate at the Massachusetts Institute of Technology, Epps conducted research with Professor Paula Hammond on polymers for the liquid crystalline displays (LCDs) found in things like radar screens. Later he would explore the use of polymers to create tires with more elasticity and better traction at Goodyear Tire & Rubber Company, during a Graduate Education for Minorities (GEM) fellowship experience with Adel Halasa.

“I have been lucky with respect to having good mentors and advisers. In each experience, not only was it fun, but we learned a lot, and we were able to see how we could make a difference,” said Epps.

Today, Epps is a leader in providing opportunities for the advancement of students and faculty who are from underrepresented groups in science and engineering. He views mentoring as an important part of his job.

In the Epps group, this means more than teaching students to do research. It means helping them develop effective presentation and writing skills, while also finding joy in what they are doing. He wants students to leave UD with tools that are translatable to the real world and go beyond the classroom or research laboratory, no matter what field a student pursues. 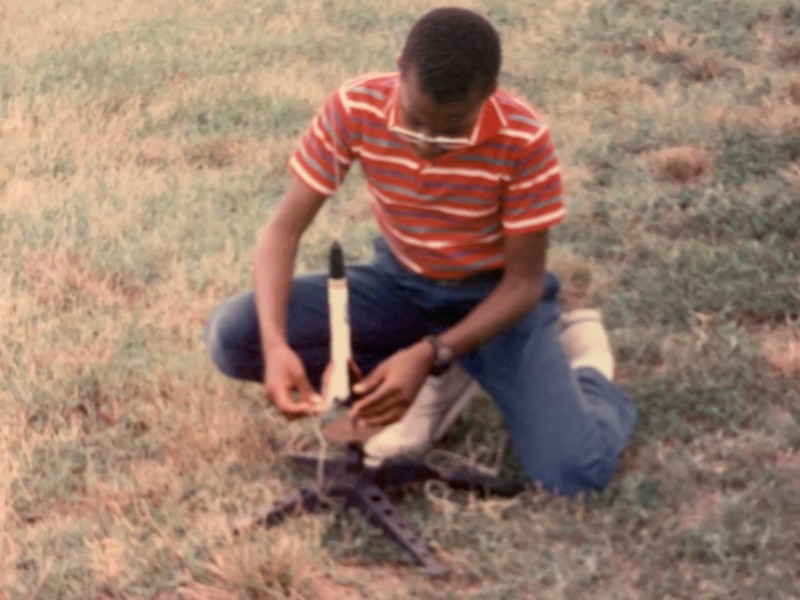 Thomas Epps displayed an interest in engineering from an early age. In this 1988 photo, Epps (age 12) prepares to launch a rocket, under supervision, during a Richmond Area Program for Minorities in Engineering (RAPME) summer program held at Virginia State University.

There are currently four postdoctoral researchers, eight graduate students, one visiting scientist and three undergraduate students in the Epps research group, but Epps also is active in ACS Project SEED, where he has worked with high school students who are either economically disadvantaged or from underrepresented groups. Some of these students, Epps explained, have flourished and gone from high school to UD and then on to graduate schools as winners of prestigious National Science Foundation Graduate Research Fellowships.

“It’s about unlocking their excitement in science, doing research and having a good impact on society,” he said. “I was fortunate that my parents could steer me in the right direction because they knew about science and engineering; I had good mentors. Not everyone has these ready opportunities, so how can we help fill in the knowledge gaps, information gaps and excitement gaps?”

In his own research, Epps said working collaboratively across disciplines has allowed him to be creative “even past my limits.” Epps pointed to UD chemical engineer Richard Wool, who passed away in 2015, as having a key influence on his early career. Wool had a passion for developing biobased materials to address societal needs.

“One of Richard’s students, Joe Stanzione, who is now a professor at Rowan University, convinced me to meet with him about some biobased polymer work,” said Epps. “We had a great talk, and it led to a collaboration that has just completed its second NSF grant, eight years later.

“It was great to be able to work with Richard and see his passion. Richard gave us a lot of research ideas, too, some of which we are still pursuing today in our biobased work.”

Today, Changqing Wu, associate professor of food toxicology, is someone Epps and other researchers in CRiSP work with to evaluate the toxicities and environmental impact of materials before they are created. According to Epps, it is a distinct advantage that allows the researchers to be more targeted and avoid wasted effort up front.

“The collaborative toxicology efforts are better. I can make a material that we know will have a smaller environmental impact rather than making a bunch of materials and then testing them and finding out that we are not really doing better after the fact,” he said.

An eye toward the future

Asked what he’s looking forward to in the next five years, Epps focused broadly, pointing to partnerships and projects he hopes will flourish over that time. There is optimism that Lignolix, the startup company he co-founded with Gottlieb and two UD graduate students, succeeds in bringing to market some of the biobased adhesives, chemicals and fragrances currently under development.

He mentioned UD’s newest centers — UD CHARM and the Center for Plastics Innovation. Among the centers’ overarching goals are efforts to build and strengthen the pipeline of future innovators and entrepreneurs. This includes experiences to inspire elementary to middle school students toward STEM; experiential internship opportunities for high school and undergraduate students; and tools for equipping graduate students and postdoctoral researchers to succeed through mentoring programs, such as UD’s NSF-sponsored Future Faculty Workshop program, among other things.

Last, but certainly not least, Epps is eager to see the UD CHARM materials research center humming along in its research enterprise and advancing next-generation sensors and optics, while also developing leading-edge technologies, such as ultra-small molecular robots for repairing things too tiny for human hands or innovative quantum materials for sensing everything from chemical weapons to changing oxygen levels in humans.

“It’s a little bit visionary, and we might not be all the way there in five years, but hopefully we make some good strides,” said Epps.